MJ Rodriguez can see me but I can’t see her. This is not the sort of existential issue that afflicted pre-pandemic interviews, but minutes before my Zoom encounter with the actor and singer I get an email from Rodriguez’s rep saying she will no longer be appearing on camera. This comes hot on the heels of another message saying Rodriguez, who this year became the first trans actor in history to be nominated for an Emmy award in a lead acting category, for her fantastic performance in Pose, would rather I didn’t ask her about the ballroom scene. Which is basically the entire world of Pose, Ryan Murphy and Brad Falchuk’s era-defining drama, set in the New York underground vogueing culture of the late 1980s and early 1990s.

I take from this nervy preamble two things. First, constantly being seen as the living embodiment of the importance of representation is exhausting, and curiously diminishing. And second, Rodriguez is ready to walk out of the shadow of her character on Pose: Blanca Evangelista, the no-nonsense “house mother” who takes all of queer New York under her wing, has a seemingly never-ending supply of wise words for them, and a heart bigger than any disco ball.

“Please don’t be mad at me,” Rodriguez begins. I’m not mad, I tell her, just disappointed as I was looking forward to talking to her face-to-face. “I’m feeling under the weather … on a personal level,” she says. “I’ve been in a bit of a funk personally and I have no problem saying that. I’m human.” Is she OK to proceed? Her reply is as well-mannered and Blanca as it gets: “Yes ma’am.”

It’s not that Rodriguez isn’t blown away by the Emmy nomination for her performance in Pose, which went from strength to strength over its three increasingly operatic series, culminating in a finale which saw Blanca and Pray Tell lip-syncing to Diana Ross’s Ain’t No Mountain High Enough. In shimmering capes. Beneath a rain machine. Pose changed everything for Rodriguez, and for a lot of LGBTQ+ people. Still, she doesn’t want to be reduced to any one aspect of her identity. “It’s crazy to think that just before Pose none of this was even a thought in anyone’s mind,” she says. “We had never been in these spaces, on those sets, in Hollywood. So it’s amazing, and honey, I’m living for it. But I do wish there was more of it so we didn’t have to constantly be the educators. Some of us just want to be the artists.”

Pose’s power lay in its commitment to representation. That’s why, even when it wasn’t perfect, it was so good. Five of its leads were played by trans women. It featured the largest trans cast, most of them black, in scripted television history. Perhaps that’s why its characters seem fused to the people who played them. Does it feel this way to Rodriguez? “I think I’ve moved on from Miss Blanca,” she says tentatively. “I’m glad, girl, that those words from the scripts came to life in my mouth because I don’t think I’d have been able to have an understanding of what my life is without those pages. These are firsts for a lot of us, especially for women of colour, and I make sure I keep Blanca on my shoulder, in my pocket, or purse. Wherever I need her, I bring her out.

‘It’s amazing and, honey, I’m living for it’ … Rodriguez as Blanca, with Billy Porter as Pray Tell, in a scene from Pose. Photograph: Eric Liebowitz/AP

“I want to be seen as a human being first,” she continues. “What comes after is my being African American, Latina, a trans woman. I just want people to see me as a performer. An actress. When you keep reading ‘She’s the first trans performer to do this, the first trans woman to be nominated for that’, I wonder how people start to perceive me. I would love it if my trans-ness was not always the leading cause of why I am celebrated. When people watch me singing on stage I don’t want them to be thinking about my trans-ness. I want them to be thinking ‘Who’s that girl up there? She’s turning it!’” She sighs. “That’s what I wish, but I also know the world.”

Her next role, co-starring with Maya Rudolph in an Apple TV+ comedy created by Alan Yang (Master of None) and Matt Hubbard (30 Rock), is a complete departure, she’s happy to report. “My character, Sofia, is a real no-nonsense type. Almost like a politician. Very dry and strait-laced. I don’t think she is trans. Maybe people who know I’m trans will see her that way but she’s not identified as either cis or trans. I want to be able to play anything. It’s about whether I’m the right person to tell the story of this character, whether she’s trans, cis, gender non-conforming, a monster, superhero or alien.” She looks forward to a time when she, or another trans actor, gets to play the lead in a mainstream romcom. Ideal leading man? “Ryan Reynolds!” she says without hesitation. “He’s funny. Or Colin Farrell. He still on the scene?”

With her new single, Something to Say, Rodriguez returns to her first love: singing. Which she can really do – as anyone who recalls the Pose scene in which Blanca and Pray Tell belted out Home from The Wiz for patients dying on an Aids ward will know. “This is what I’ve always dreamed of doing,” Rodriguez says of the single, an upbeat slice of retro pop she co-wrote with Earth, Wind and Fire bassist Verdine White. How did she find working in the music industry? “It’s all about how you demand your space,” Rodriguez replies. “I made it very clear the kind of dancers I wanted [in the video] and the team around me. For so long it’s been nerve-racking within my community, because you never know how the specific forms of oppression are going to be deflected back on you. Honey, I tell you I’ve been surprised, especially by the music industry, because I could have been in spaces that were misogynistic and controlling, but these strong men of colour are loving on me in a way I never thought I would be loved on.”

Rodriguez grew up in Newark and Jackson, New Jersey. Her mum worked in a hospital and her dad for UPS. Both parents, who later divorced but remain good friends, instilled a strong work ethic in their only child. “My mum is a strong, hardworking, African American woman. My father comes from a background of working-class Puerto Rican immigrants. I feel like working hard is genetically ingrained in me. This girl likes to keep her engines running.” 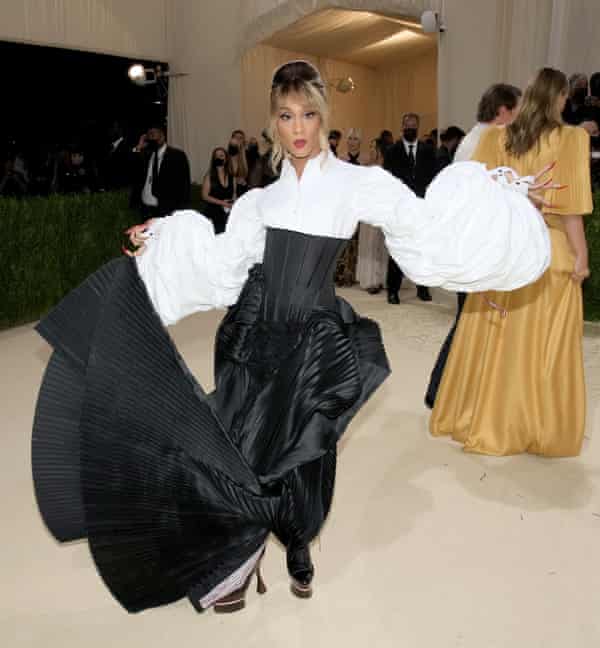 ‘Working hard is genetically ingrained in me’ … Rodriguez at the Met Gala in New York this week. Photograph: Jeff Kravitz/FilmMagic

When Rodriguez was seven, her mum came to watch her perform in a school recital. It was a Damascene moment; the kind you can imagine being exquisitely directed by Janet Mock. “I remember it like the back of my own hand,” Rodriguez recalls. “I was so nervous, then the music came on and I just started singing, using my hands, expressing it all. I saw my mom look at me, really look at me. And she smiled. I was like, she knows. There’s a little girl right here who lives for this.” What did Rodriguez sing? “The Greatest Love of All by Whitney Houston,” she sighs. “I swear to god Whitney Houston is my whole life. She’s from New Jersey, too. I hear you, Whitney. I see you, girl.”

By the age of 11 Rodriguez was studying at the New Jersey Performing Arts Center and performing professionally. Her godfather became her vocal coach, she found the ballroom scene and her own house father, and won a scholarship to attend Berklee College of Music. In 2011, she landed the role of Angel in an off-Broadway revival of Rent, but then, just like that, the work dried up. For four years. “I felt like I let everyone down,” she says. “Oh girl, it was dreadful. There was a point where I got completely depleted. I said to my mom: ‘I’m not doing this any more. They’re never going to accept me as a trans woman so I may as well go under the radar, live a stealth life, move through the world saying nothing about my trans-ness.’ My mum said: ‘Don’t stop, something is about to happen.’ I was on the verge of quitting, and that’s when Pose came along.”

Our time’s up, and I tell Rodriguez I have one last question. Would she consider turning her camera on now? “Yes ma’am,” she replies softly. “I’m a little sweaty so I’m just going to wipe my face real quick.” Seconds later, she appears on my screen. It’s mid-morning in the Tri-state area and Rodriguez is sitting at home on a sofa. Her hair is long and straight. She’s wearing a stripy top, a locket round her neck, and no makeup. She looks shy, a little tired, herself. Does she have anything to add? “Don’t be concerned with other people’s opinions about you,” she says, reverting to pure Blanca wisdom. “Keep on the path you know is best for you. And make sure you keep the people who love you in your pocket – like I keep Blanca in mine.”