Miriam Margolyes tore into Winona Ryder once again on The Graham Norton Show, labelling the actress a ‘shoplifter’ as she explained she was not the star’s biggest fan.

On the latest episode of The Graham Norton Show, Miriam was joined by stars such as Paul Rudd, Halle Berry and Stephen Fry as she discussed her new autobiography This Much Is True.

But she couldn’t resist digging into her dislike of actress Winona, which she has spoken about with Graham on the show in the past.

On Friday night’s episode, the 80-year-old bizarrely brought up her Age of Innocence co-star’s historic shoplifting conviction from 2001 as she recalled getting her costumes prepared – much to the amusement of her fellow guests on the chat show.

She explained of the critically-acclaimed film: ‘Before it started, you have to go in a costume parade and everybody looks at you, to see if the costume fits the character and all that and I was the very last person to be seen that day.

‘It was a big cast, loads of people. You know, Daniel Day Lewis, Michelle Pfeiffer, really important people and then there was that shoplifter Winona Ryder, and I didn’t like her, I really didn’t…’


Miriam said she ‘didn’t like’ working with Winona (Picture: BBC)

She was met by stunned reactions from the rest of the guests, with Stephen Fry putting his hand on his face amid laughter from the audience.

Actress Winona was previously convicted of shoplifting $5,000 (£3704) worth of designer clothes from Saks Fifth Avenue in Beverly Hills in December 2001.

She was sentenced to three years’ supervised probation, ordered to do 480 hours of community service and fined a total of $2,700 (£2,000) as well as having to pay compensation to Saks for the stolen items and undergo counselling.

Graham followed up by shouting: ‘She didn’t like her!’ before Miriam moved swiftly on: ‘Lots of other people, Richard E Grant, who was adorable… Sian Phillips and when I got in the room I could see, they were just exhausted., the whole crew. They were slumped, they were tired, they were fed up. 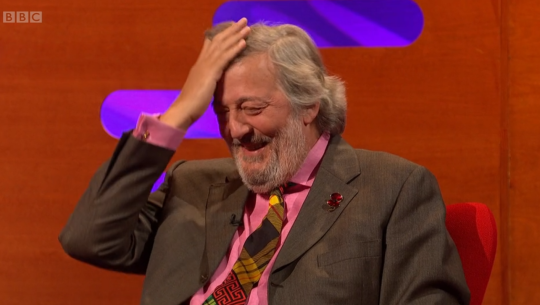 ‘I thought, I’ve got to do something to cheer them up! When you see people in that state and you know you’re going to be working with them, and I thought, I know what I can do.’

In true Miriam fashion, she revealed the hilarious WTF moment: ‘I lifted up my top and I tore off my bra, and my bosoms which are large, and friendly, and I just gave them to them and it made them happy!’

It’s not the first time Miriam has spoken of her dislike of Winona, having told the story of how annoyed she was not to be nominated for an Oscar for the film they starred in together.

In a previous interview on Graham Norton, she said: ‘I was brilliant in it [the film] and the reason I wasn’t nominated [for an Oscar] was because of Winona Ryder, I don’t like her, I really don’t.

‘Oh that b***h!’ Graham cheekily remarked, with Miriam adding: ‘Absolutely, I was livid.’

The Graham Norton Show airs Fridays from 10.35pm on BBC One.