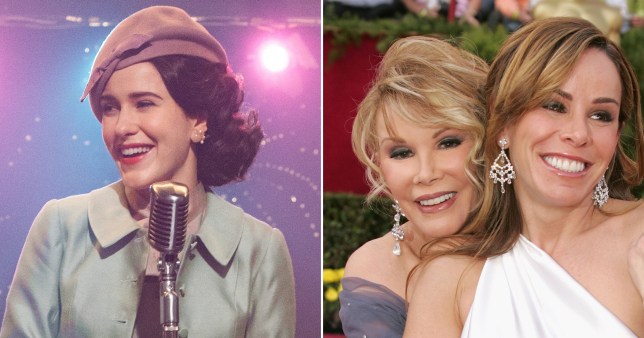 Melissa Rivers (right) is upset her mother Joan is not credited as an inspiration for Mrs Maisel (Picture: AP/Getty)

Melissa Rivers has shared her thoughts on The Marvelous Mrs Maisel, saying she was ‘hurt’ the show didn’t acknowledge her mother Joan Rivers as one of the inspirations.

Speaking about her mother’s legacy, Melissa, 53, said on Behind the Velvet Rope with David Yontef: ‘I can’t watch it. Like, it really profoundly upset me… it was more about the lack of acknowledgment of my mother’s career and my mother’s legacy.

‘They’re scared to say she was one of the inspirations. And I don’t know if it’s because they were scared that I would be litigious or what, but that really hurt me. And especially because it was so soon after she died. And the joke is everyone tells me I would love the show.’

The Fashion Police star says she is not interested in pursuing any legal action but that she would have been the show’s ‘biggest cheerleader’ if they had acknowledged that Joan was one of the inspirations behind it.

Melissa added: ‘I could be completely wrong. People could say, “You know, you’re crazy. You’re being stupid.” But to me, like I said, all they ever had to do was reach out and acknowledge.

‘All I ever wanted was a note, maybe a thank you in one of the acceptance speeches after all these years.’

Melissa noted that lead character Miriam Maisel, played by Rachel Brosnahan, drew inspiration from many of the female comics of the 1950s and 60s as well as ‘a lot of my mum’.

Joan died in 2014 at the age of 81, and is widely regarded as a trailblazer for female comedians to come.

Her daughter also claims that the only person to mention Joan in connection to the show was actress Jane Lynch, 60, who thanked her and other female comedian in her Emmy award speech for her role in Mrs Maisel in 2019.

Melissa says Jane’s tribute touched her, adding: ‘I was in tears and I sent her flowers the next day saying thank you.’

The Marvelous Mrs Maisel creator, Amy Sherman-Palladino, has previously credited the inspiration to the tales she heard from her father who was a stand-up comic.

She previously told Deadline: ‘We took my Dad’s life, his stories, and a lot of stuff I heard about growing up. We have stolen it completely, did not compensate my parents at all, and thrown it into the show.

‘So all of the childhood drama and tragedy has served me well. Here’s why you don’t go to therapy to work out your issues because you’d have nothing to write about. It’s all an homage to my Dad.’