Speaking on tonight’s 100th episode of The Martin Lewis Money Show, the presenter revealed that American Express cardholders can get £184 to spend in the grocery store if they have the rewards gold card.

‘This is how to get serious shopping at Sainsburys,’ he began. ‘It’s about the American Express rewards gold credit card.

He continued: ‘Then, because you can now swap Avios points into Nectar, you convert that into 36,000 Nectar points, which you can then spend at Nectar partners, including Sainsburys, where it’s worth £184 – nearly double what they would typically suggest.’ 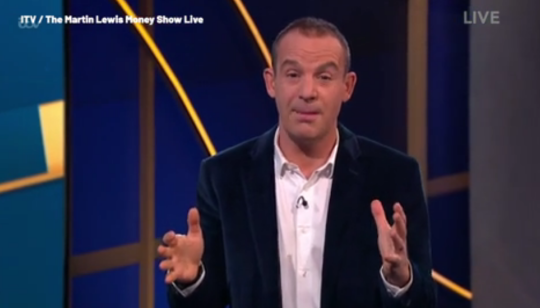 Martin Lewis shared a nifty trick to get £184 to spend at Sainsburys (Picture: ITV)

‘This is a new thing that’s come in, Avios to Nectar, and you can do Nectar to Avios too, that’s why this trick works,’ he added.

‘Do it carefully if you do this, but there can be free shopping for you there.’

Martin did, however, warn audiences that they should only do this if they’re normal spending is over £1,000 a month.

From there, select the ‘Convert your points’ option on either site and then users can also choose to convert points automatically in either direction.

If you want more tips and tricks on saving money, as well as chat about cash and alerts on deals and discounts, join our Facebook Group, Money Pot.