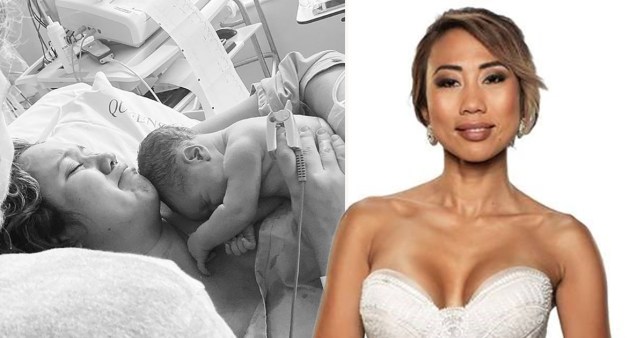 The reality star found fame on season six of MAFS Australia in 2019, which is currently airing on E4 in the UK, and was seen sharing a pretty huge life update with fans on Instagram on Tuesday.

Ning revealed she had become a grandmother as her oldest daughter Kia, 17, gave birth to a little girl, prompting her co-star Cyrell Paul to label her the ‘hottest grandma’ as she sent over her well wishes.

Alongside a black and white snap of her daughter holding her newborn baby moments after giving birth, Ning announced her family’s exciting news and shared how proud she was of Kia.

‘So very proud of my oldest daughter, who did something I wasn’t able to ever do. Thank you for having me with you to witness the most incredible, beautiful and raw experience called childbirth,’ Ning wrote.

‘Watching your baby have a baby was an emotional experience for all of us, but you kicked a*se hunnay! Kia you are one tough cookie.’

Ning continued: ‘Words can not describe how proud I am of you, you didn’t complain, not once you said you couldn’t do it. Not even one curse word. You did better then good mama ??‍? #nini #grandaughter #newarrival #babyfeels.’

Cyrell commented on the post: ‘Aren’t u the f**king hottest grandma !! Tell your daughter congratulations ? and she has nothing to worry about. Being fearless and being an amazing mother is in her blood ?.’

Ning later shared another snap of her getting to know her granddaughter as she held her in hospital and cooed: ‘Let me just look at you ? #inlove #precious #cuddletime #nini #babyspam #granddaughterlove.’ 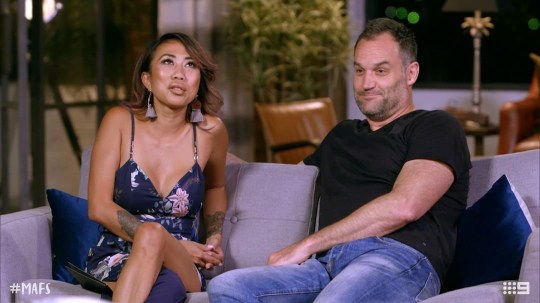 Ning and Mark’s marriage has been a rocky road (Picture: Nine)

Fans will recognise Ning from Married At First Sight Australia, where she tied the knot with Mark Scrivens, after being paired together by a team of experts.

From the get go, the pair’s marriage proved a little tricky and viewers have seen the couple struggle with intimacy, as they navigate being a newlywed throughout the experiment – that includes taking partners home to meet each other’s families and a final commitment ceremony.

Season six, however, has seen its couples overshadowed by two huge cheating scandals, with Sam Ball and Ines Basic being the first pair to go behind their partners’ backs to enjoy a secret fling.

The late arrival of Dan Webb has proven too much temptation for Jessika Power, who was seen enjoying a secret kiss with the dad-of-one at the weekly dinner party.

Viewers were left fuming after recently watching Dan try and defend his decision to ‘sneak around’ with Jess, as he insisted by doing so he was protecting the feelings of his wife Tamara Joy.

Married At First Sight Australia is available to stream on All 4.