José ‘Coche’ Luis Inciarte appeared on This Morning to relive the horror of having to eat his fellow passengers after a plane crash in the Andes in 1972.

The man was one of 16 survivors from the terrifying incident on October 13, when Uruguayan Air Force Flight 571 – which was heading from Montevideo, Uruguay to Santiago, Chile – struck a mountain when inexperienced co-pilot Lieutenant-Colonel Dante Héctor Lagurara mistakenly thought they had reached Curicó, despite instrument readings indicating otherwise.

The Fairchild FH-227D aircraft began its descent too early, and many of the 45 on board died, with 34 initial survivors and 18 more passengers dying in the 72 days after the crash.

Those who survived turned to cannibalism, and Coche has explained how they felt they had no choice.

Appearing on This Morning via video link from Uruguay on Monday, the man – who has written a book Memories of the Andes – said: ‘There was no other option, if we want to stay alive.

‘We make an assembly between all and we argue to do it and not to do it. Not to do it seems to be the same as to die. Everybody decided to eat, but… take a decision, and execute it, have a great and large space. 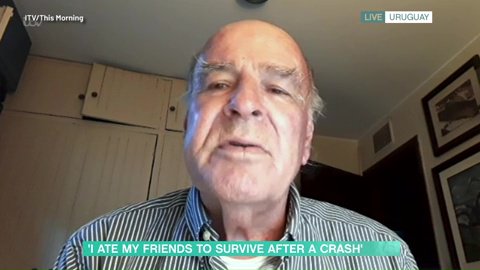 Coche opened up on the harrowing experience (Photo: ITV)

‘When you wanting to take a piece of flesh, a flesh of the dead body of your friend, frozen body, the hand doesn’t obey, and you have to make a great effort of energy and mind to make your arm to obey.

‘And then, it is obeying. Not immediately, but hours later, it obeys. The same with the open mouth, to put it inside the mouth, and then to swallow, a little piece, with a hand on your heart, and say, “I’m saved.” ‘

And while Coche had faith his his fellow survivors to be able to find help, there were other moments where he feared death.

‘Most days, I thought that I was going to go out from there because some went out to walk on December 12th and I had a great confidence with them to reach someplace, and they did it,’ he explained.

‘Other days, in those terrible days that you were waiting of time, I realised they were not going to reach any place so I put my date of dying on December 24.’

And while he went through such a narrowing experience, Coche admitted he tries not to dwell on what he went through and has instead used it as inspiration throughout his life.

He added: ‘When I have problems, I think about the Andes and the problems seem to be very little against the others. It helps me, but it’s not part of my life.’

Full list of businesses opening in next lockdown roadmap stage