MAFS UK 2022 fans ‘work out’ which couples are still together 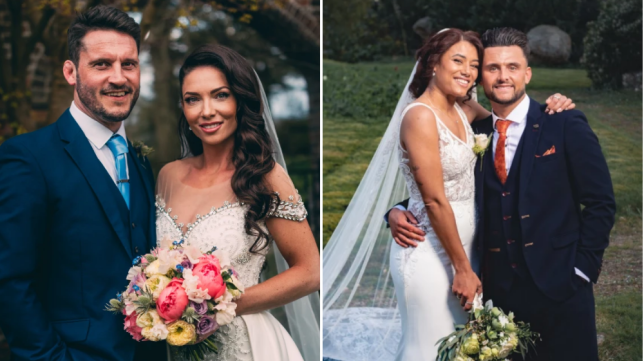 Married At First Sight UK fans reckon they’ve worked out which couples are still together and which couples have split ahead of the E4 show’s grand final later this week.

The 2022 series is nearly over, and the remaining six pairs are set to embark on their last dates in scenes due to air on Monday night, before then deciding whether they will continue their relationships outside of the experiment.

They will also return to our screens for the Married At First Sight UK reunion, which will no doubt be as explosive as all the dinner parties we’ve been privy to.

But before all is revealed about the happily-ever-afters on the show, viewers are already sharing theories over who is still going strong and who has broken up.

Let’s get into it…

Fans reckon it’s extremely unlikely that George Roberts and April Banbury are still together given that George was arrested on suspicion of controlling and coercive behaviour earlier this month.

On October 3, reports emerged that Roberts had been arrested just days after Channel 4 defended casting him after three of his exes reportedly raised concerns.

While Roberts is yet to publicly comment on the matter, April has since posted cryptically on Instagram about strength.

‘There is no force equal to a woman determined to rise,’ she captioned her most recent snap, along with the hashtags ‘#femaleempowerment #strongwomen #freckles.’

April has only shared one photo of herself with George throughout the entire series, and the picture in question has been flooded with comments calling for her to walk away.

While Adrian Sanderson and Thomas Hartley have shared a number of couple photos on their social media profiles, fans aren’t convinced the pair are still together.

Doubts were raised after Thomas decided to leave the experiment in scenes that aired last week because of the lack of intimacy in their relationship and a spoiler clip ahead of Monday night’s episode appears to see the couple at loggerheads over their future.

‘I think maybe they won’t [make it],’ guessed one fan. ‘They are so close to the final commitment ceremonies. I’m sure they’ll remain friends, but Thomas is very hard work. Adrian needs someone kinder and quieter.’

Echoing a similar sentiment, another said: ‘Whatever the outcome, I hope you stay friends.’

Sophie Brown and Jonathan Wiseman were late in joining the experiment and have had their fair share of ups and downs in their marriage.

While Sophie has lovingly posted photos of her with her other half over her Instagram following their wedding day, fans aren’t sure that these two are still together.

Jonathan appears to be spending a lot of quality time with his family and recently refused to disclose whether he was still in a relationship with his bride on an Instagram live.

It’s not very clear cut as to whether these two have gone the distance, but fans are rooting for them regardless.

‘You are such a genuine couple, wish you all the best,’ one said.

It appears the jury is out on whether Whitney Hughes and Matt Murray are a couple or not, with fans split on their relationship status.

The pair shocked audiences earlier in the series when they decided they wanted to leave their original partners and re-join the show together, with the experts giving them their permission to do so.

While both parties have voiced their admiration for each other on social media, it seems their followers are unsure whether they are still seeing each other.

‘Thousand percent they don’t stay together,’ one said.

Others have noticed that the pair have unfollowed each other… which doesn’t bode well.

Zoe and Jenna – together

Zoe Clifton and Jenna Robinson dropped a clue that they’re still an item after the homestay week, with Jenna sharing the story behind Zoe’s picked rat. Yes, really.

While the pair have been avidly sharing loved-up selfies on their profiles, Jenna took to Instagram to explain to her followers why her other half has the grim feature in her home.

In the video, she explained: ‘I am getting so many messages about Mr Pickles and I feel like I just need to confirm that Zoe did not physically pickle the rat.

‘So, she got it as a gift one year. Her and her friend they’d go and get each other the grossest, strangest gift for like under five pound or something like that. And that is what she got gifted.

‘So, Zoe doesn’t know the story behind Mr Pickles – where he came from, if he died of natural causes or not – and she also feels like she can’t bring herself to throw him away because he has his own little story, which kind of sounds like something a vegan would say and I kind of would get it.’

Chanita and Jordan – together

Chanita Stephenson and Jordan Emmett-Connelly have been arguably the most solid couple of the whole series and fans are keeping everything crossed that their love continues to blossom after the series.

They have both posted several cute pictures documenting their time together on social media throughout, perhaps giving us a clue as to where they’re at now.

‘I really hope you two work out,’ one fan wrote under one of Jordan’s posts. ‘You are the most genuine of all the couples’

However, another follower did cast doubt that their romance is still on the cards. Sharing a rumour, they said: ‘Someone on the MAFS UK Facebook group said they are not. They saw Jordan at an airport and he said no.’

Please, for the love of God, let’s hope this isn’t true.