During her appearance on the Saving Grace podcast, the 26-year-old reality star revealed that she doesn’t speak to the PE teacher anymore after he ‘made jokes’ about her getting spiked.

When asked if she’s still close with Hugo, Sharon said: ‘So, I was and then I cut him off really abruptly.’

She later recalled FaceTiming him later in the evening ‘because he seemed quite drunk, and he made jokes about me getting spiked.’

In a statement that is no longer visible, Hugo addressed the comments made on TikTok Stories and labelled them ‘outrageous and simply false.’

‘Firstly, Spiking is not a topic I use within my jokes nor do I find it funny, It’s horrific to be honest,’ he penned.


Sharon revealed she cut Hugo off as a friend (Picture: YouTube)

‘I wouldn’t joke about someone being spiked, it’s just not who I am, friend or not.

‘The wild comment made around inappropriate touching is outrageous and simply false, to say something like this is seriously damaging and paints an unfair picture of me.’

‘You cannot just throw that sort of language around,’ he added.

The two reality stars featured on series seven of the hit dating show and were coupled up as friends for a couple of episodes. 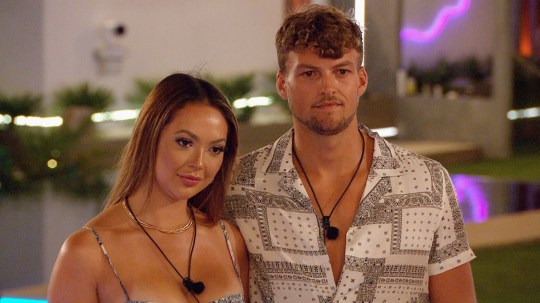 Following her exit from the villa Sharon has called out the series over what she claims is a lack of Asian representation, while adding that she believes she was ‘scapegoated’ to tick a diversity box.

‘It’s not just ethnicity and while I do think it’s great that you know, close to 50% of the cast will be diverse or from a different background I still think we’re not seeing any Asians in the original line-up.

Metro.co.uk has reached out to Sharon Gaffka and Hugo Hammond’s reps for comment.