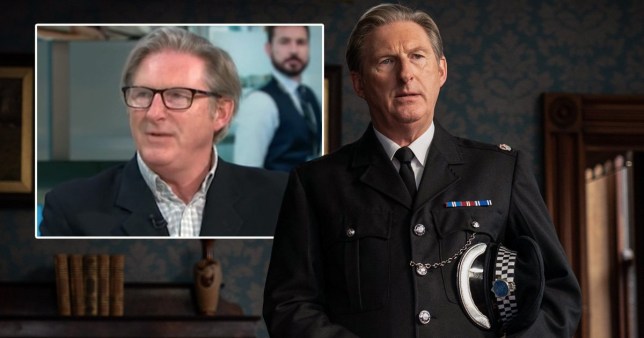 Adrian Dunbar uncertain as to whether his character will return next season (Picture: BBC & GMB)

Line Of Duty ended on a cliffhanger last night and, muddying the waters even further, Adrian Dunbar said he doesn’t know whether he’ll appear in the next series.

Speaking on Good Morning Britain this morning, the Irish actor – who plays Superintendent Ted Hastings in the hit drama – said he has ‘no idea’ about his return.

Kate had been lured to a dark, secluded location by AC-12 target DCI Jo Davidson (Kelly Macdonald) who was revealed to be related to Tommy Hunter, leader of the organised crime group (OCG).

Ryan threatened to shoot Kate while she aimed her gun at him, warning him to back off. As things escalated, two gunshots rang out just as the episode ended.

‘I actually do not have any idea [about his return],’ Adrian said, disappointing hosts Susanna Reid and Adil Ray.

When asked whether Kate Fleming would be back he joked: ‘I wish I could help you but I’d have to kill you.’

Adrian revealed that he usually gets ‘notes’ from the BBC on what he can and can’t say about the show when he does interviews.

‘Now and again leaks do happen and it’s a show that depends on the collusion of the public with the show,’ he said.

He explained that the cast – and sometimes boss Jed Mercurio too – often don’t know how a series is going to end until the 99th hour. The only giveaway would be whether they’re asked to film a mystery scene to be added in later.

‘Regarding the ending, Jed always gives himself a bit of leeway where the ending is never set in stone, and we don’t get the last episode until very late in the day,’ Adrian said.

‘We don’t know for the first three episodes, sometimes Jed doesn’t know. He might just say to one of us, “do a look over here, a look over there”.’

Even though the 62-year-old said he doesn’t know if there will be another season of the show, he believes it will be back if it continues to be a success.

WWE: Charlotte Flair on ‘worst behaviour’ as she strips off for photo