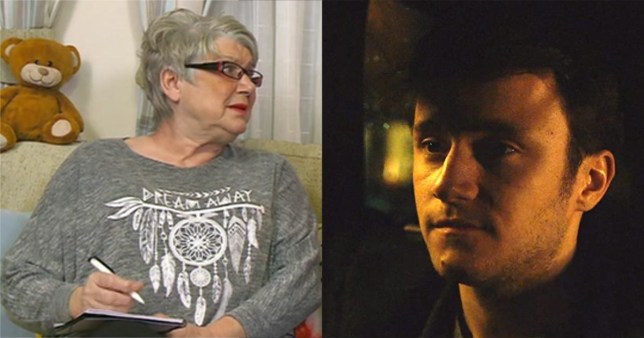 Gogglebox star Jenny is taking no chances with her notebook (Picture: BBC/Channel 4)

This article contains spoilers for Line of Duty series 6 episode 2.

Gogglebox star Jenny Newby has spoken for the nation with her love of Line of Duty, conducting her own investigation as she takes notes in her trusty notepad.

But it’s not just Gogglebox fans who are living for her genius idea, with Gregory Piper, who plays Ryan Pilkington in the BBC drama, proud to make an appearance.

As Ryan was seen popping up once again in episode two of the latest series, Jenny penned down his name – and Gregory was left delighted.

‘Watching @C4Gogglebox and ‘Pilkington’ making it into Jenny’s notebook has made my day,’ he tweeted.

Fans are in total agreement, with one telling him: ‘We are all laughing, but guarantee Jenny gonna solve the case before the rest of us.’

‘She’s hilarious with the notebook,’ another said, while one more added: ‘You’ve made it into the book!!!’

This week’s episode featured a huge bombshell as the actor’s character – who he’s played since the very first series aired back in 2012 – returned as a member of the police force on DCI Jo Davidson’s (Kelly McDonald) team.

Gregory wasted no time basking in the glory of the big reveal as he took to social media minutes after the show went off the air to revel in his alter ego’s new role.

Absolutely living for Jenny off @C4Gogglebox taking detailed notes in her notebook every time #LineofDuty comes on. Would be a public service if you could publish them all so the rest of us can follow what’s happening, @leegogglebox

When viewers were first introduced to Ryan in series one, he was seen committing low-level crimes for the Organised Crime Group.

Initially delivering burner phones for the OCG and Tommy Hunter (Brian McCardie), he would eventually have a deeper involvement in their activities, and by the fifth season he was in with Lisa McQueen (Rochenda Sandall) and John Corbett (Stephen Graham).

At the end of series five, he was seen training to become a police officer, with fans assuming he’s ready to carry on his inside job.

In the words of Ted Hastings, we don’t know who to trust.