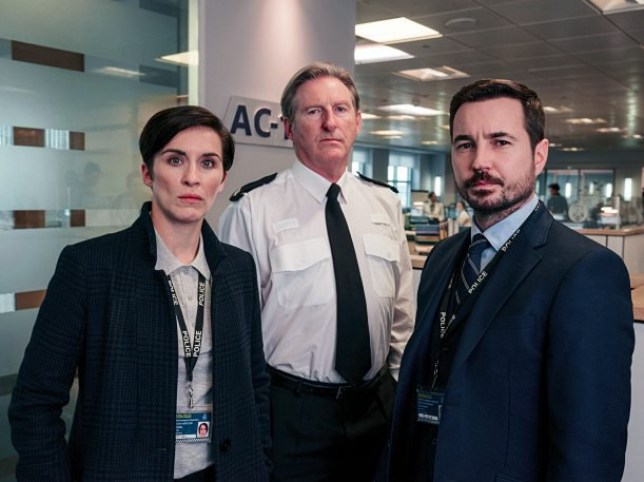 The Line of Duty mates could have their own sitcom (Picture: BBC/World Productions)

A Line of Duty fan has reimagined the police drama as the opening credits to Friends, and it’s everything we could want.

The wildly popular series, written by Jed Mercurio, drew fans in with its manhunt for the elusive H, conducted by the likes of Steve Arnott (Martin Compston), Kate Fleming (Vicky McClure) and Ted Hastings (Adrian Dunbar).

But, as we know from Steve and Kate’s love of the word ‘mate’, there were also some very tight bonds between the characters. Right, mate?

However, when their antics are clipped together and played with the soundtrack of The Rembrandts’ I’ll Be There For You, it doesn’t quite have the same warming vibe as the Central Perk gang.

With the upbeat music playing in the amazing clip, we’re shown shots of Roz Huntley (Thandie Newton) nearly being cut into pieces, Matthew ‘Dot’ Cottan (Craig Parkinson) shooting his way out of the interview in his ‘urgent exit’, and Steve being thrown down a set of stairs.

Just fun times all round, basically.

While Steve, Kate, Ted, and Dot, also known as ‘The Caddy’, feature as the friends, the fan also took the liberty of adding in ‘H’, but joking that the accompanying shots of him had been ‘redacted’.

They wrote on Twitter: ‘As its 17 years since the friends finale, why not rewatch the line of duty cast in the friends intro…’ and we reckon they’ve pretty much created a masterpiece.

Line of Duty series six came to its highly-anticipated conclusion this month, with some fans left a little deflated by the lacklustre final episode.

The show’s creator shared his thoughts on the achievement on Twitter, acknowledging people’s frustration about how everything went down.

He wrote: ‘We’re honoured and flattered by the viewing figures for #LineofDuty6. We knew attempting to explore the real nature of corruption in our society wouldn’t appeal to everyone, but we do sincerely thank you all for watching. It’s been our privilege to share your Sunday nights.’

The BBC is yet to confirm if Line of Duty will return for a seventh series.

Line of Duty is available to stream on BBC iPlayer.