NEW photos show Lily James looking identical to Pamela Anderson as she is transformed into the star for the upcoming Hulu mini-series about her relationship and infamous sex tape with Tommy Lee.

Mamma Mia actress Lily James, 32, looked the vision of Pamela Anderson as she sported a healthy tan and a bright blonde wig to emulate the blonde bombshell’s signature look. 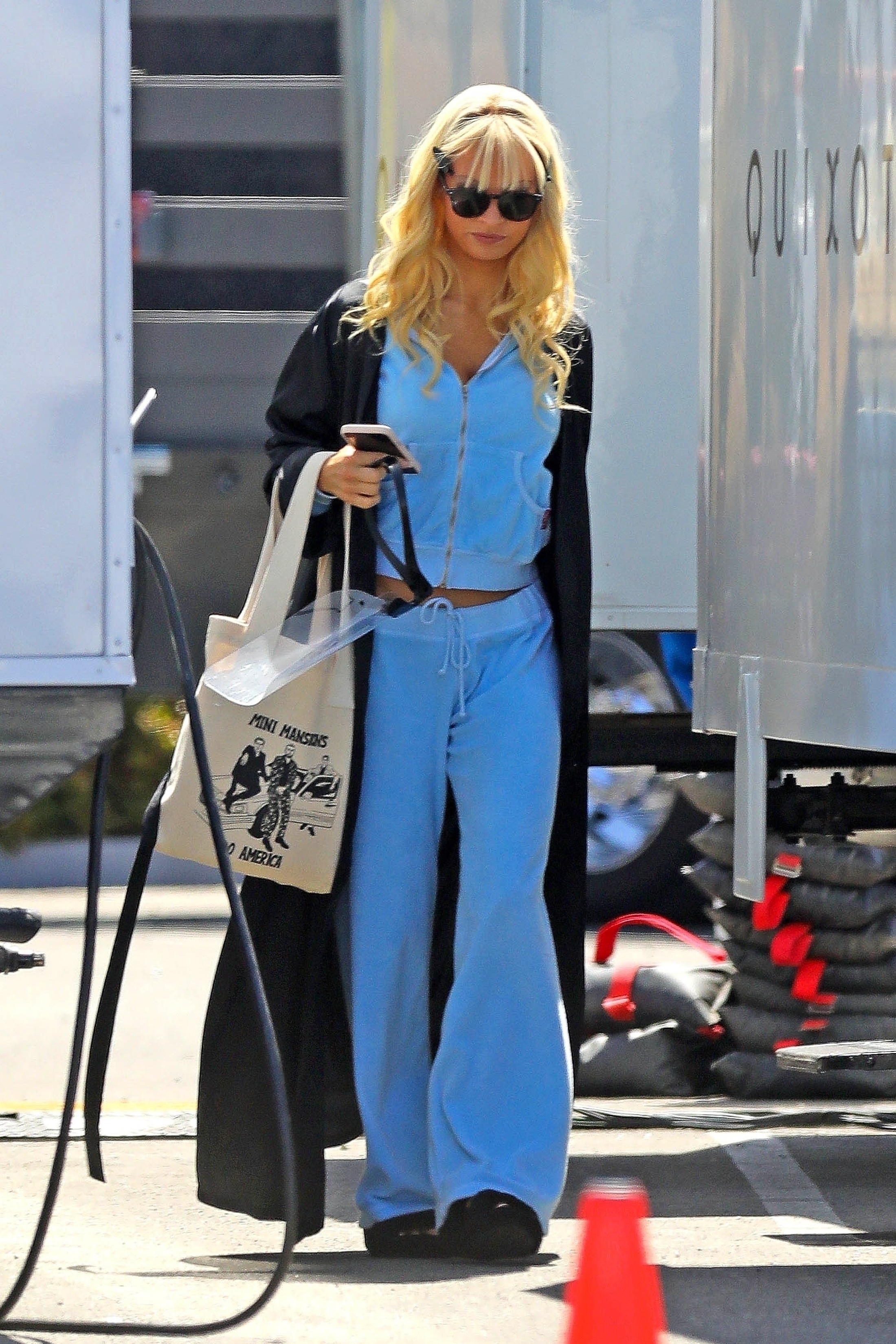 Lily wore a baby blue tracksuit, long black cardigan and black sunglasses as she held a Mini Mansions tote bag on the set of the controversial new series, Pam and Tommy.

The blonde wig was held back out of the star’s face with black hairclips as she walked past trailers in chunky black open toe sandals.

Lily was seen walking past her own trailer with a sign reading ‘Pam’ stuck on the side, in between filming.

The Baywatch star will be played by Lily James as the limited series tells the story of her romance and marriage to Mötley Crüe singer Tommy Lee, and the leaking of their infamous sex tape. 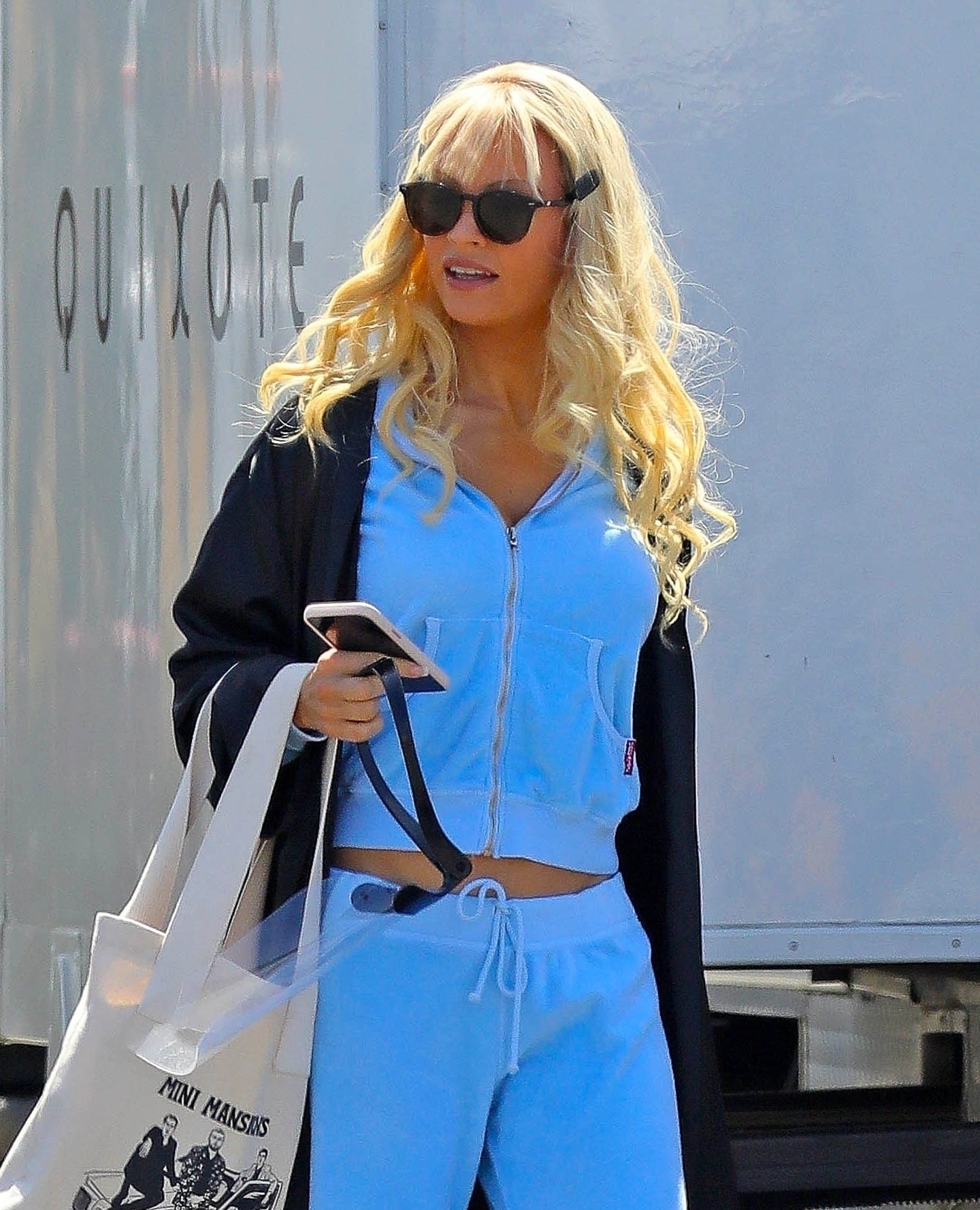 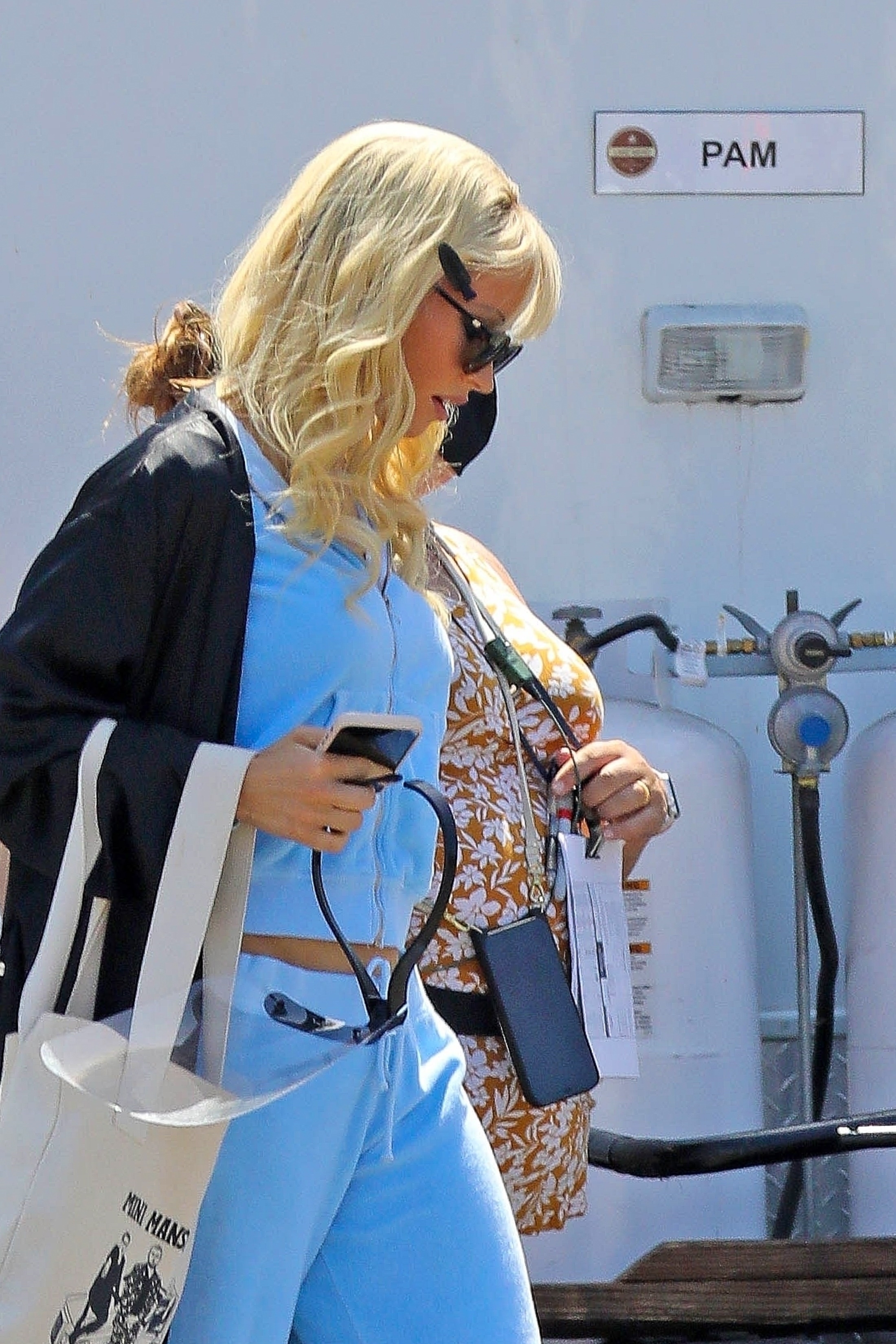 Lily will be starring alongside Marvel actor Sebastian Stan, 38, who is playing drummer Tommy Lee in the eight part series.

Lily James previously gushed that she loved playing a sex symbol as a pal of the actress shared that she was having a blast wearing a fake DD bust.

But the biopic has attracted controversy as Pamela Anderson slammed it as a “cheap knockoff” and vowed she will never watch it.

A friend of the star said that one thing Pam really isn’t happy about is how the show will relive the moment her and Tommy’s sex tape was stolen and leaked to the public. 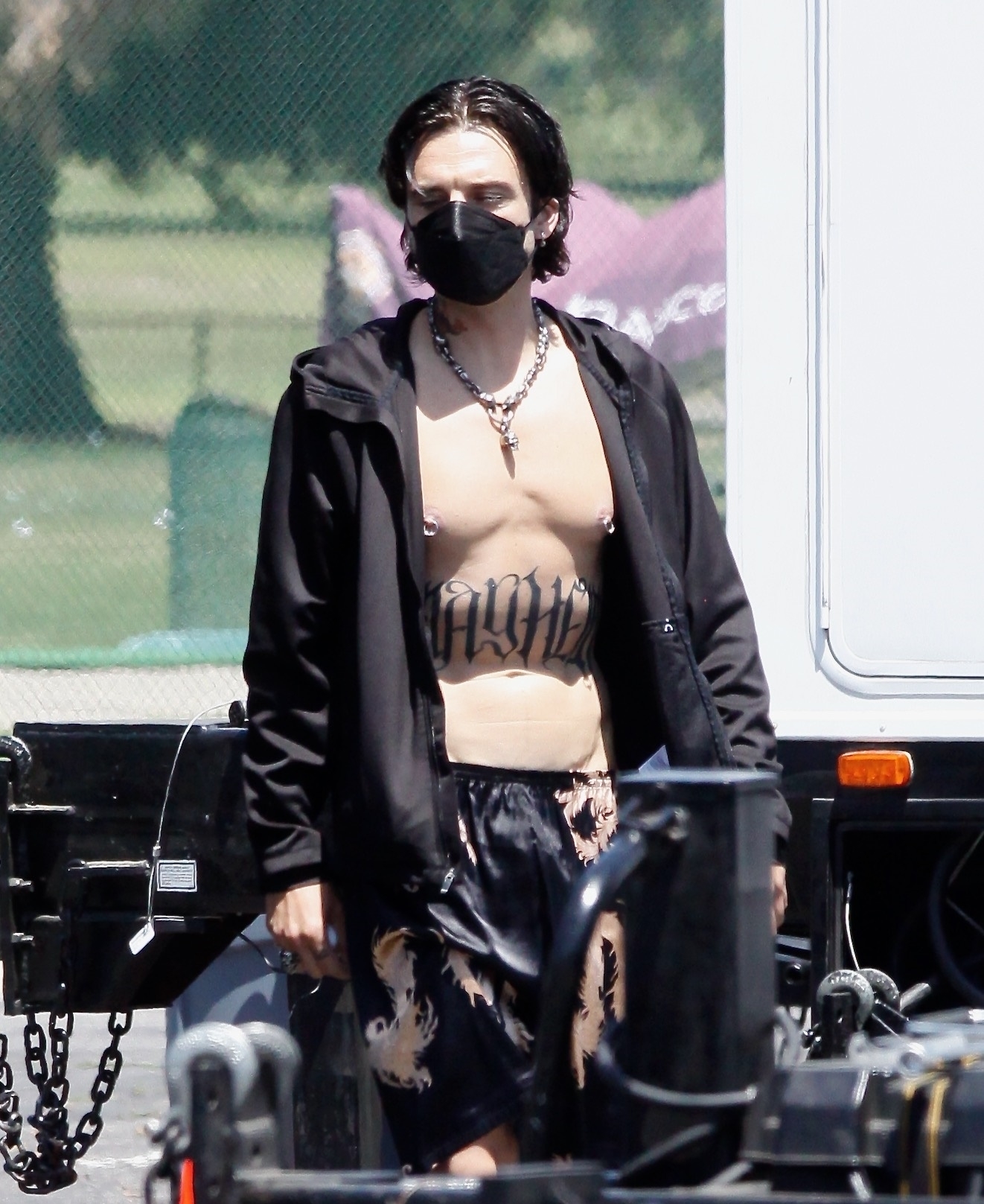 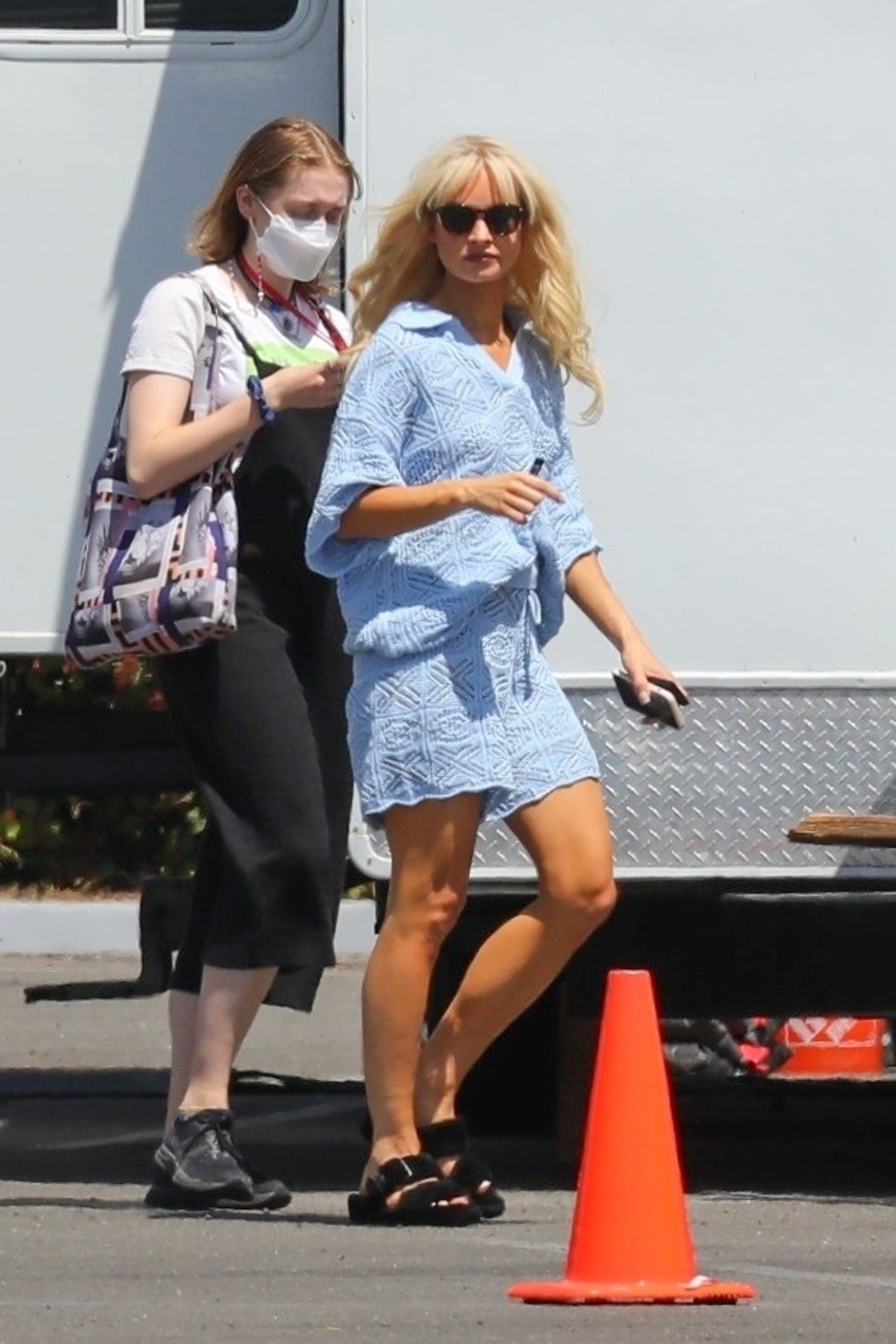 Lily was seen without her fake bust and tracksuit as she kept it casual in a matching blue two pieceCredit: BackGrid

The friend added: “Pamela finds it amusing that this girl is getting so much attention for playing her.”

Courtney Love also addressed the series, writing on Facebook: “I find this so f***ing outrageous.”

She talked on the sex tape leak, saying: “It was disgusting. I banned anyone discussing it. It destroyed my friend Pamela’s life. Utterly.”

Love also took a swipe at Lily James directly as she wrote: “And shame on Lily James whoever the f*** she is.”