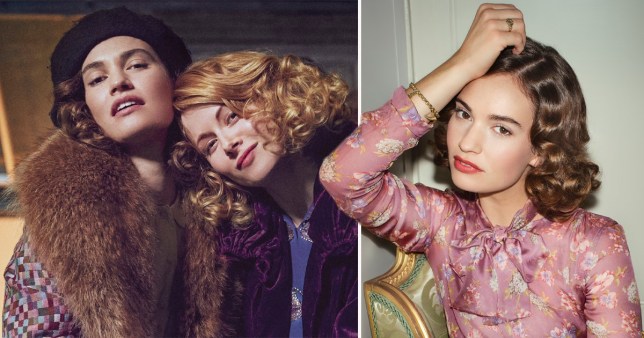 Set between two World Wars and based on a novel published over 75 years ago, Lily James’ new BBC series The Pursuit of Love tells the story of two endearing young women venturing into the real world for the first time, both wide-eyed and yearning to fall in love.

The protagonists – Linda Radlett (played by Lily) and her cousin and best friend Fanny Logan (Emily Beecham) – grow up in a privileged but confined household, with Linda’s father, Matthew Radlett (Dominic West), keeping everyone in the family under his very strict supervision.

This draconian environment has a particularly profound impact on Linda, whose wild and passionate nature leaves her desperate for romance and adventure, with Fanny following her lead.

During a recent interview with Metro.co.uk and other press, Rebecca star Lily spoke about how ‘radical’ it felt playing Linda, given the character’s lack of fear and desire to forge her own path in spite of the numerous restrictions placed upon women at the time.

Her Pursuit of Love co-star Emily Mortimer, who also wrote and directed the three-part series, previously touched upon this aspect of Linda’s persona, stating last year that ‘the wild, love addicted Linda Radlett’ to this day ‘still reads as radical’.

Elaborating on this point, Lily said during the interview: ‘Everything about her I believe is radical, because she lives life so honestly.

‘She’s unafraid. She has all this passion and fire and energy but no structure to put it into because she wasn’t educated and the restraint upon their choices was so great, and yet she still carves out this life following her own heart and making great sacrifices and great personal loss. There’s a courage to be who she is that feels radical, even now.’

The Pursuit of Love veers from light-hearted moments to scenes grounded in sober reality, mirroring Linda and Fanny’s transition from adolescence to adulthood.

Lily admitted that she finds parts of Linda’s story ‘difficult even now to watch’, explaining that various elements of the drama, including the depiction of mothers abandoning their children and postnatal depression, ‘feels like brave, radical storytelling in itself’. 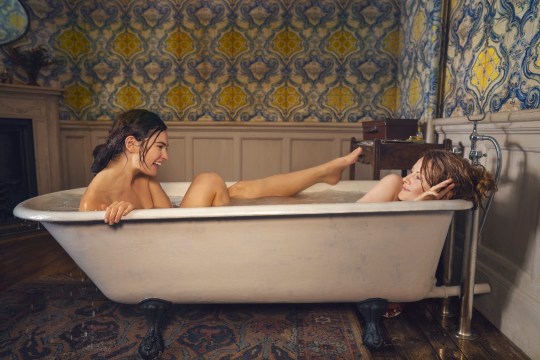 ‘There’s a lot of stuff that feels so deeply important and brave to tell, especially in this setting at that time. It’s totally radical,’ she added.

While Linda and Fanny grow up in extraordinary circumstances, surrounded by riches and opulence in abundance, the pair offer a relatable insight into the minds of two ingénues taking their first, very naïve steps into society.

Although as young women in the early 20th century their options are limited, their journeys end up diverging, with Fanny opting for a more stable life and Linda deciding to see where her heart will lead her. 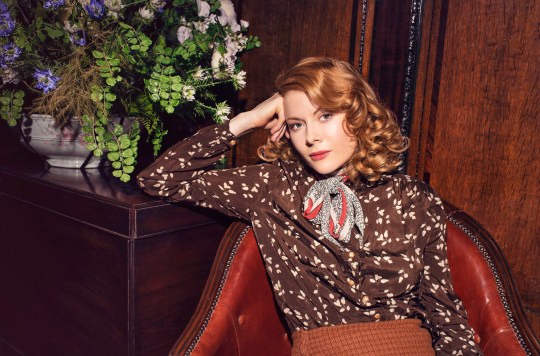 Some people who watch The Pursuit of Love may be taken back to their own teenage years, remembering how they also experienced those feelings of anxiety and apprehension while wondering how their lives would unfold as they became older.

This was something Emily found when preparing to play Fanny, who is far more timid than Linda when it comes to pursuing matters of the heart.

‘I found it so easy to get into the headspace of a young person, it feels like yesterday really, that youthfulness and unknowing, and awkwardness… a mixture of trepidation and excitement for getting older,’ the actor said during the joint interview with Lily.

‘I always remember being equally afraid and just so couldn’t wait to go out and venture out and date and become an adult.’

While the title of the series, The Pursuit of Love, hints at the two leads’ individual quests for romantic love, their strong bond is the driving force behind the narrative.

As much as the story highlights how progressive it may have seemed for a woman in that era to choose her heart over her head, it also emphasises the incredible strength of female friendship, a message that will resonate with many who join Linda and Fanny on their journeys.

The Pursuit of Love begins on May 9 at 9pm on BBC One, with all three episodes dropping on iPlayer afterwards.