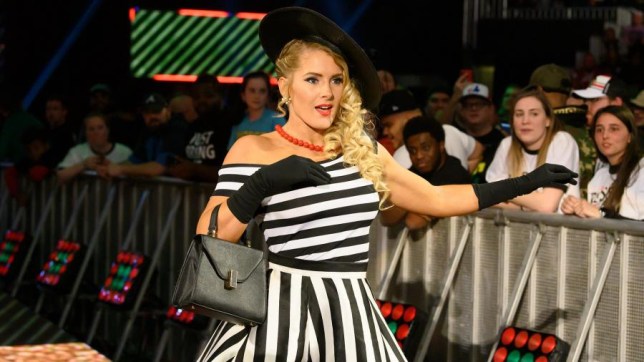 WWE superstar Lacey Evans has revealed she went to talk to her bosses before getting pregnant again.

The 30-year-old wrestler – who already has eight-year-old daughter Summer with her husband Alfonso – admitted she felt like the time was right to expand her family but wanted to make sure the company wouldn’t be caught short if they had any plans for her on-screen.

Appearing on The Bellas Podcast, she told retired WWE twins Nikki and Brie: ‘I had a good run with Becky Lynch and got to do amazing things with Bayley and Sasha [Banks] and Saudi Arabia [with Natalya].

‘All of a sudden, it came to where I wasn’t being used and I was backstage, which I don’t mind because I come from nothing. I have a good job, I’m being able to pay my bills, and I’m very blessed. I’ll sit and eat steak and shrimp at catering, no problem.

‘I wondered, “How does it work to be a woman in WWE when it comes to pregnancy?’ I knock on the door and said, “When is a good time? I’m not being used and I’ve always wanted to be a mom [again].”

‘I knew for fact that I could have the baby, come back, and kick ass. I went to WWE and asked, “How does it work to be a woman in WWE and wanting to extend their family?” ‘

Lacey revealed that management were incredibly supportive, and WWE boss Vince McMahon decided to use her in a high profile storyline with Ric and Charlotte Flair ‘a couple of months’ after she was trying to get pregnant.

‘They were so supportive of even the thought of extending my family. For a couple of months, I tried,’ she said.

‘All of a sudden, Vince has this idea with the storyline and I was like, “Alight, everything has been negative, sir, I’ll get back in the game.”

‘Sure enough, Sunday at 8:15, it was positive. One week to the day of Elimination Chamber. I was thinking, “Ugh, this is great, but, dammit.”

‘You feel guilty because there are so many people working on these storylines. From the writers to Charlotte to Ric and I’m just, “Damn”. What can you do? It took me from 8:15 to 8:40 on how to inform the powers that be.’