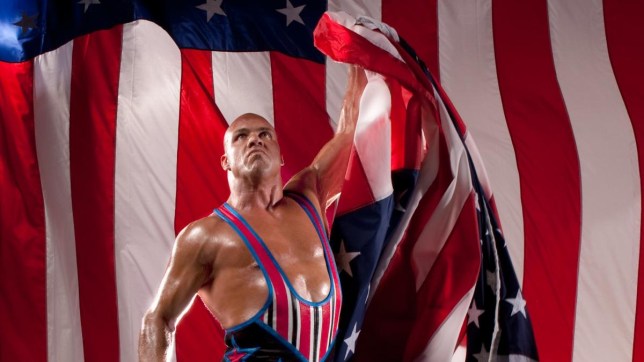 WWE legend Kurt Angle posted the most tantalising tease to get the wrestling world talking before AEW Revolution.

The Hall of Famer – whose final match was a losing effort against King Corbin at WrestleMania 35 – uploaded a very cryptic video as he looked absolutely ripped lacing up his boots and wearing his trademark singlet and a number of t-shirt designs.

The post came just one day ahead of All Elite Wrestling’s highly anticipated pay-per-view on Sunday (March 7) with fans early waiting to find out which mystery star will make his debut.

The message at the end of the clip – which was shared without comment – simply read: ‘To be continued…’

Paul Wight – formerly known as The Big Show before ending his 22-year run with WWE to jump ship to AEW – promised someone Hall of Fame-worthy for Revolution, and there’s no doubting Angle fits the bill.

The 1996 Olympic Gold Medallist has serious pedigree in the world of pro wrestling, and his jump to TNA Wrestling – now IMPACT – back in 2006 proves he will ply his craft wherever suits him.

He recently revealed he turned down several offers from WWE to continue in a non-wrestling role, and thus he remains a free agent.

Plenty of names have been linked to AEW ahead of the big reveal, including CM Punk, Dave Bautista, Brock Lesnar, Christian and Angle himself.

Teasing the newcomer on Dynamite this week, Paul Wight promised: ‘I have the biggest scoop ever. This Sunday at Revolution, AEW is going to hire, put in-contract, a Hall of Fame worthy talent that is a hug surprise and a huge asset to AEW. But listen, it’s not who you think.’

Not surprisingly, everyone is keeping quiet – although AEW boss Tony Khan has revealed the mystery man is one of his favourite wrestlers of all time – but Punk has since taken part in a Twitter Q&A and didn’t give anyone the chance to ask the question as he shut down the rumours right away.