Kim Kardashian opened up about her relationship with Pete Davidson (Pictures: Getty)

Kim Kardashian has given us all another glimpse into her budding romance with Pete Davidson.

The 41-year-old started dating the Saturday Night Live comedian, 28, last year, following the end of her marriage to Kanye West.

Despite being spotted on a series of date nights, the pair have kept things mostly low-key ever since, with the Keeping Up With The Kardashians star only making things Instagram official last month.

Lifting the lid on their relationship in a candid chat on Good Morning America, she teased that things between them are serious.

‘Obviously, I want to take my time, but I’m very happy and very content. It’s such a good feeling just to be at peace,’ she said.

Questioned on how ‘serious’ things are between them, she continued: ‘I am a relationship kind of girl, for sure, and I wouldn’t be with someone if I didn’t plan on spending a lot of my time with them.’

Pete has the blessing of Kim’s famous family, with momager Kris Jenner describing him as ‘a really nice guy’.

Khloe Kardashian weighed in on their bond, adding of her sister’s love life: ‘He just makes her laugh and she laughs all the time.’

He has also met the Skims businesswoman’s oldest daughter, North West, with the pair pictured driving around in an electric Moke car. 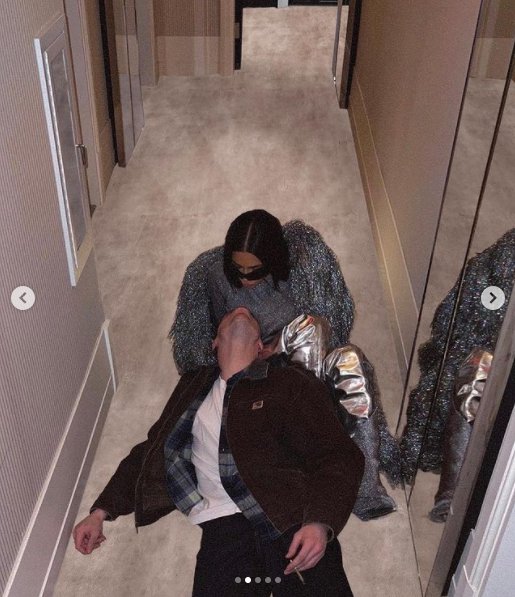 Kim and Pete were first romantically linked in last October, after the reality star’s hosting stint on SNL.

Things took a turn when the What Men Want actor referred to her as his ‘girlfriend’ earlier this year, before Kim shared the first pictures with her beau on social media.

Kim sent us all into meltdown when she confirmed that her beau also has a series of permanent inkings dedicated to their romance.

‘He has a few tattoos, a few cute ones that he got, but the Kim one isn’t a tattoo, it’s actually a branding,’ she let slip on the Ellen Show.

‘Let me explain it, he wanted to do something that was really different because okay, first tattoo he got, I was like, “Thank you, oh my god,” second, I was like, “So cute,” but that’s what tattoo people do, right?

‘They get tattoos of what’s going on in their life.’

Asked if he has three tattoos of her, she clarified: ‘A little more than that.

‘The branding is my name. The other ones are cutesy things. I think my favourite one, it says: “My girl is a lawyer.” And that one’s really cute.’