The BBC’s brand new competition series All That Glitters: Britain’s Next Jewellery Star hast been hit with complaints after Katherine Ryan made a joke about the confidence displayed by straight white men.

The new show, which is hosted by the comedian, sees eight jewellers battle it out in a range of challenges to prove they are the next big name in jewellery.

Audiences took offense last Tuesday when Katherine cracked a funny while speaking to Sri Lanka-born jewellery designer Tamara during the broadcast of the first episode.

‘You need to really back yourself,’ she said, as Tamara struggled with one of the challenges. ‘Do you know how confident a straight white man would be right now?’ 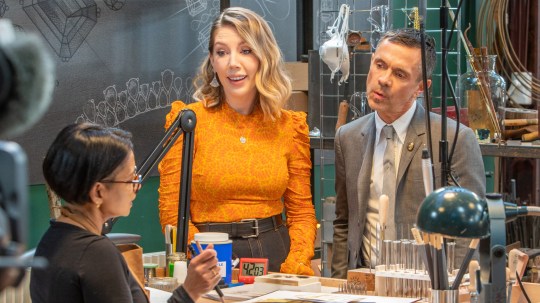 The BBC defended Katherine’s joke after viewers complained, with a spokesperson saying: ‘Many viewers of this programme will be familiar with Katherine Ryan’s well-established style of comedy after multiple appearances on BBC comedy programmes over the years.

‘Comedy is one of the most subjective areas of programming and we can assure you we never set out to offend viewers with anything we show.’

In @BBCTwoâs #allthatglitters, @Kathbum said to a contestant who was doubting herself:
âDo you know how confident a straight, white man would be right now?â
âThink like a white man!â

Why did the BBC think it was ok to broadcast sexist & racist stereotyping/demonising? https://t.co/e6W5100j5q

As a jewellery maker I was taken aback by this comment on the @bbc jewellery competition #allthatglitters.

Katherine Ryan talking to one of the competitors of Indian origin when she was struggling with a task.

âDo you know how confident a straight white man would be right now.â pic.twitter.com/GfxNaoS2er

@BBC_Complaints I am sure I’m not the first to express my alarm at the comment “Think like a white man ” made by Katherine Ryan last night on all that glitters .Imagine if she would have said think like a black man !!!!

Just heard the host of #AllThatGlitters telling a woman participant of Asian origin to think like a white man to be confident!! Dear @BBCOne do you realise how racist and biased this sounds?

@BBCTwo #AllThatGlitters What started out to be a good Jewellery show then #kathrynryan said..âDo you know how confident a straight white man would be right now”?â âThink like a White manâ How is this acceptable!!! She needs to be removed!!! #BBC

âThink like a white manâ. #AllThatGlitters #biasBBC absolutely disgusted you did not edit this racist segment out. Absolutely despair at how we cannot even feel comfortable and respected watching our supposed British Broadcast Corporation .

A number of fragile viewers were up in arms over Katherine’s humour and flooded Twitter in anger.

‘Absolutely disgusted you did not edit this racist segment out,’ raged one. ‘Absolutely despair at how we cannot even feel comfortable and respected watching our supposed British Broadcasting Corporation.’

Not everyone on social media took issue with Katherine’s remark, however, with some calling her ‘a babe’ and branding it ‘great advice’.

Next week, the jewelers have to prove their worth with a chain collar that everyone will want, before taking on a commission for a real client, Chris, who wants a sweetheart brooch for his officer wife Kelly to take on her next tour of duty.

All That Glitters airs Tuesdays at 8pm on BBC Two.