Katherine Ryan got revenge on her daughter’s ‘bully’ (Picture: UKTV)

Katherine Ryan once had to apologise to the mum of a child at her daughter’s school for calling a boy out, full name included, on a podcast.

Tonight, the comic brings her baby Fred to his first panel show on the latest episode of Mel Giedroyc’s Unapologetic, which sees celebrity guests compete to share their most scandalous stories, judged by Lou Sanders.

Naturally, Katherine has plenty, from dating her high school security guard to get back at an ex (who is now actually her husband), and ruining her step dad’s car because he was dating her mum… four years after graduating from her high school.

Joined by Drag Race’s Bimini Bon Boulash and comedian Toussaint Douglass, Katherine recalled giving out a children’s name on a podcast and swiftly feeling the wrath of said child’s mother for doing so.

‘There was a point in my life where I really felt like I wanted revenge against my daughter’s bullies,’ she told hosts Mel and Lou.

‘So I thought it was a funny angle to bully these children in my stand up. To talk about them, to slag them off because to me, comedy is a lot about surprise. So it’s very surprising to have a sweet, looking young single mom slagging of a bunch of toddlers.

‘I told this story on a podcast, ’cause I didn’t know that people listened to that. And it was a crazy story, this child, took the money tin that the teacher collected 50p in from every child on a Friday and they would go to the tuck shop and get some sweets.

‘This child was such a genius that in an act against capitalism, I think, stole the money tin off the teacher’s desk and sh*t in it.’

Katherine said this child ‘bullied’ her daughter Violet ‘quite aggressively’ so thought: ‘This f**king kid. I can slag this kid off, if his parents don’t like it, they can maybe sort the bullying out and give my child a good day at school.

‘Then he got a bunch of accomplices,’ she continued. ‘He was so smart, he lured other children in the bathrooms and they all peed on top of the poo in the money tin in the loos. And then a lot of these kids got worms and that’s how the story broke and all the parents found out about the shit in the money tin and all the wee because kids are disguising and they all got worms.

‘My daughter got a sticker for being a whistle blower.’

While Violet got her well-deserved sticker Katherine got told off when she then made this story public knowledge. 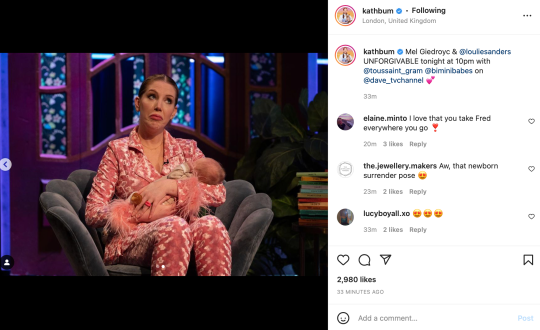 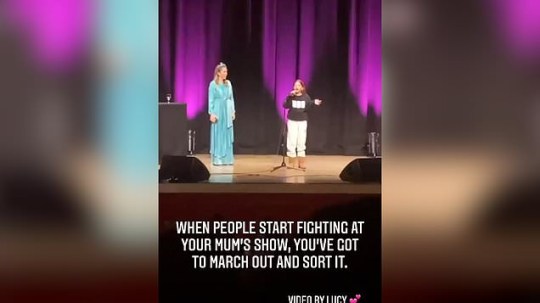 ‘So I told this story but with his full name and then his mother confronted me in the school yard. And she said, “Well, you’ve certainly immortalised that story by telling it on Richard Harring’s podcast.”

‘I was like, “What?” So I had to apologise to her. I never should have used the child’s name.’

Katherine’s daughter is already making the world a better place at 12-years-old, actually getting on stage and stopping a brawl between audience members at one of her mum’s comedy shows when it got rowdy.

Violet is the comedian’s daughter from a previous relationship, while she also shares baby son Fred with husband Bobby Kootstra.