Katherine Ryan has issued a staunch defence for ‘roast comedy’ following Jimmy Carr’s recent Holocaust joke backlash, saying that the genre must continue ‘even if people get offended’.

During the National Comedy Awards for Stand Up To Cancer, which aired on Channel 4 on Saturday evening and took place a few days ago, the comedian won the prize for outstanding female comedy entertainment performance.

The award ceremony took place shortly after a resurfaced clip from Carr’s Netflix special His Dark Material sparked huge levels of fury, when he joked that the ‘thousands of Gypsies that were killed by the Nazis’ was a ‘positive’.

During her acceptance speech at the event, Ryan began by paying homage to the late Sean Lock, saying that she felt ‘very lucky to have ever spent a moment in his presence’.

‘It evolved into 8 Out Of 10 Cats Does Countdown, and I always looked forward to the bit where Jimmy Carr would give me the roast joke, you know? That’s a genre of comedy that he happens to be best at. I think it’s really important that we all protect that genre even if people get offended by it.’ 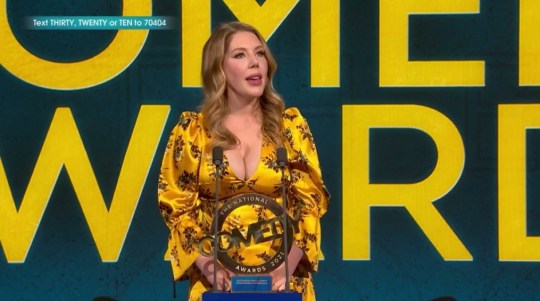 Ryan said she would ‘always look forward’ to Carr giving her a ‘roast joke’ on TV (Picture: Channel 4)

Some people cheered and clapped over Ryan’s remark, before she concluded her speech by thanking those who worked on 8 Out Of 10 Cats Does Countdown, including Carr.

‘Thank you to all the men who let me be on their Channel 4 shows,’ she added, before leaving the stage.

Some people on Twitter expressed their shock over Ryan’s support of Carr, while others defended her statement. 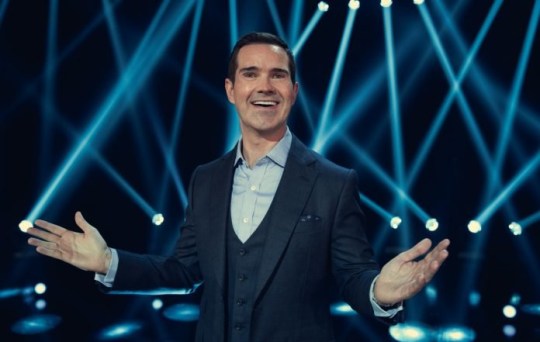 ‘Not sure @Kathbum saying @jimmycarr roasting people was not offensive …….. was offensive,’ another wrote.

Someone else referenced the digs that were made about Carr during the event, after host Tom Allen said that the comedian was ‘recovering from a nasty bout of career suicide’.

‘Anyone else notice the constant Jimmy Carr jokes right up until @Kathbum spoke out to support him and then they suddenly stopped. Strange that,’ they stated.

Another said that ‘the silence was LOUD’ after Ryan’s statement about Carr and ‘roast comedy’.

The barrister said: ‘The truly disturbing thing isn’t just the gag, it’s that on hearing it, instead of leaving, the audience clapped, whooped and cheered in approval.’

The National Comedy Awards will be available to watch on All 4.