Kate Garraway: Finding Derek viewers were left in tears on Tuesday night as they showed their support for the ‘inspiring’ Good Morning Britain presenter, following her husband Derek Draper’s long fight with coronavirus.

The film focuses on Derek, 53, who remains in hospital after being admitted with coronavirus symptoms in March last year when he was put into an induced coma. He is the ‘sickest living person’ medical experts at his hospital have seen since the beginning of the pandemic.

Piers Morgan and Ben Shephard led tributes to Kate as the documentary aired. The film followed the Good Morning Britain host and her family’s experience during his illness, and saw her speaking to people suffering long Covid, NHS staff and other experts.

The new documentary also showed Derek breaking down in tears as he awoke from his coma for the first time in moving scenes, having awoke to a minimal state of consciousness in July.

Viewers were overcome with emotion while watching the show, praising Kate’s incredible courage during Draper’s illness. 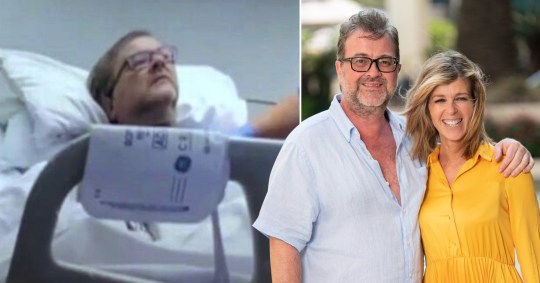 ‘Cannot stop the tears watching this. My heart breaks for them #FindingDerek @kategarraway is just incredible. Incredible,’ one wrote.

‘Kate Garraway is a massively strong person. Amazing,’ another said.

Watching #FindingDerek .. ð¢
To see him cry early on broke my heart.
To hear the nurse with Long Covid renewed my fear for this damn virus.
Kate Garraway is a massively strong person. Amazing…

What a truly inspirational lady Kate Garraway is. No wonder their kids are so well rounded with such a role model, though Iâm sure they all have tough days. Heartbreaking to see Derek cry – Canât imagine how that must make his family feel. Youâre amazing Kate. ð¢ð#FindingDerek

Derek saying he doesnât know how to cope has completely broke my heart ð¥ºð¥º if anything is going to make people act sensibly it has to be this documentary. So much love for @kategarraway #FindingDerek #itv

âI promised I would save you and I will save youâ – my heart is breaking for Kate Garraway, what an inspiration she isð¥ºð¥º #FindingDerek

Anyone who thinks itâs not right that we canât go on holiday or canât go to the pub, needs to watch #FindingDerek to see the horrendous impact this virus is having. Kate Garraway though… what an incredible woman ðð¼

This is absolutely heartbreaking. We moan and struggle being stuck in our houses. Imagine being trapped in your own body in hospital only able to say the word âpainâ. Truly devastating. Keep fighting Derek and stay strong @kategarraway #FindingDerek

I am sobbing. Iâm so angry at people who deny Covid, wonât wear their mask, wonât stay at home if they are unwell. Cannot stop the tears watching this. My heart breaks for them #FindingDerek @kategarraway is just incredible. Incredible. ð

The film also saw Kate and Derek’s children Darcey, 14, and Billy, 11, talk about their father’s illness, with the film providing emotional viewing.

One scene sees her recall being told by Derek’s doctors that he was the most seriously ill person they had seen who remained alive, while another devastating moment sees him tell her that he can’t go on.

Kate says she decided to feature footage of Derek in his hospital bed in her new documentary because he would want his story to be told. She also detailed the moment he told her he couldn’t go on any longer.

‘Derek has devoted his life to mental health and good mental health,’ Kate said in the film. ‘He’s a psychotherapist and a psychologist. So I feel like he would want his journey to be told.’

Kate clarified that she has no plans to quit Good Morning Britain to look after Derek once he returns home, after fearing she would have to become his primary carer.

Should we cancel trip & why can influencers go away? Your holiday queries answered