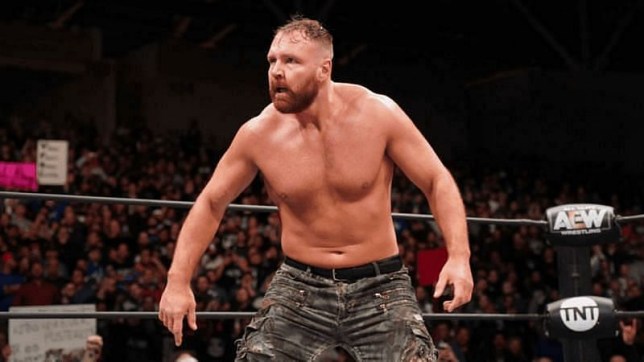 Jon Moxley has revealed one of his favourite matches – and most fans will never get to see this clash with AJ Styles.

The AEW wrestler – who spent time in WWE as Dean Ambrose from signing a developmental deal in 2011 until his exit in 2019 – has opened up about his fondest memories from live, untelevised events, and one match sticks out above the rest.

He exclusively told Metro.co.uk: ‘Probably my favourite matches, when I think of them, they’re in my memory – I don’t even know that they’re on film. They might be on somebody’s camera phone!

‘I remember AJ Styles in Dayton, Ohio, which was about an hour from where I grew up. I had friends and family there.

‘The crowd was just insane. It was probably our best match! Everything was hitting on all cylinders, the crowd was nuts!’

Life is full of moments where things feel like they’ve come full circle and the former world champion can attest to that. 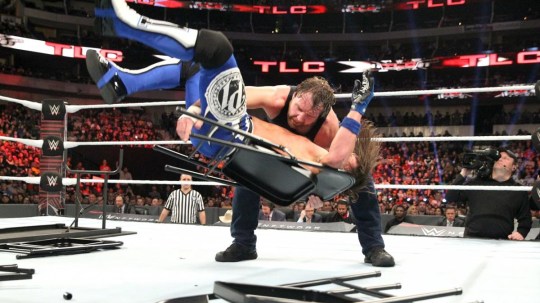 The two superstars did battle at WWE TLC in 2016 (Photo: WWE)

Again during his WWE run, Moxley can recall another emotional hometown night back at his old workplace – albeit under very different circumstances.

‘I had a steel cage match in Cincinnati at the arena that I worked at when I grew up. Sitting around at that arena at minor league hockey games, doing event staff,’ he said.

‘I’d look around the building imagining wrestling there. I’d walk through the halls imagining what it’d be like to come here one day and be in the main event – and however many years later, it did!

‘Those hometown shows are always awesome. Those matches stand out in my mind as those magical nights, but they were never on TV. They exist in my mind all the same, so who cares?’

The 35-year-old wrestler – poised for an innovative Exploding Barbed Wire Deathmatch against Kenny Omega at AEW Revolution this weekend – also addressed the significance of live events, which have been missed during the pandemic.

‘Seventy-five percent of your career isn’t on TV, it takes place on house shows! That’s 75% of all the wrestling you do, it isn’t even on TV – it’s a lot! That’s kinda what made my career in WWE, the house shows,’ he added.

‘You bust your ass and put on a hell of a show in the main event every single time, and they know it’s just for them.’

Looking ahead to this weekend, Moxley is excited to face Omega in such a dangerous environment – even with potentially very legitimate career-threatening ramifications.

‘A lot of rulebreakers have tried to do heinous things to take me out of the game, but this is the first time anybody has tried to explode me,’ he laughed.

‘To me, it makes perfect sense – things have gotta end. It’s only gonna end one way! If that’s how I go out, if that’s how my story ends, live on pay-per-view in an exploding deathmatch, so be it!

‘That’s a beautiful way to go out, if you ask me.’