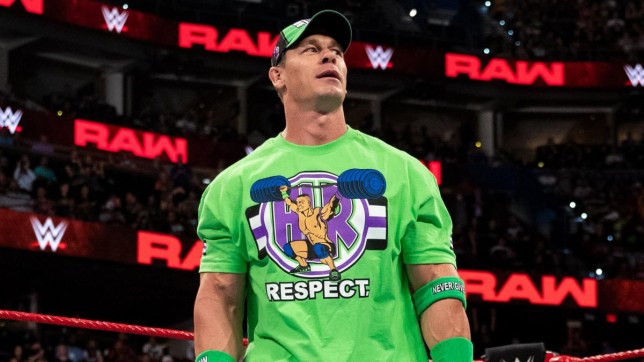 Is he really going to miss the show of shows? (Credit: WWE)

John Cena has ruled himself out of WrestleMania 37 and insisted he won’t be around for the biggest WWE show of the year.

The 16-time world champion – who is more often seen in Hollywood blockbusters than the wrestling ring nowadays – has been on every edition of the annual extravaganza since his first one back in 2004, but it sounds like filming schedules and the coronavirus pandemic mean he’ll have to skip it this time round.

Speaking to Sports Illustrated, he said: ‘Currently, I’m in Vancouver shooting Peacemaker, the series for HBO Max. Given the quarantine regulations, if I were to leave Canada, upon return I would have to quarantine for another two weeks.

‘Essentially, that would shut production down. Strictly based on the letter of the law right now, there is no logistical way I can be there. We film now until July.’

Although Cena hasn’t been in a match every year, the company has always found ways to fit him into plans, such as WrestleMania 32 when he helped The Rock against the Wyatt Family.

There was also WrestleMania 35, when he came out in his old Doctor of Thuganomics guise to confront Elias to the delight of the packed stadium.

Even a non-physical role seems to be a stretch – although you can never really tell in the whacky and unpredictable world of WWE.

However, as it stands, Cena seems pretty adamant, and even joked he has become what he once hated after previously being very critical of Dwayne Johnson and other part time stars who moved on from the business that made them.

Now, he said: ‘What a hypocritical situation. I used to be very open about the fact that part-timers were just that, and here I am at 44 years old and I’ve become what I despise, as they say. That is kind of what it is.’

The champ did make a comeback of sorts last month for the special WrestleMania announcement for the next three years, as he revealed the company’s plans to come to Hollywood in 2023.

Will fans really not be able to see him in April? We’ll to wait and, ahem, see…