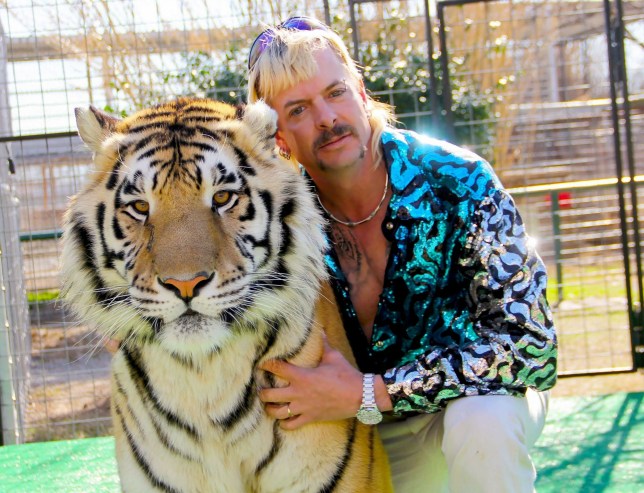 Joe Exotic is currently in prison but he is cashing in on his fame from behind bars by launching a shoe line (Picture: Rex Features)

Joe Exotic is launching his own shoe line to celebrate the one year anniversary of popular Netflix show Tiger King, it has been claimed.

The reality star, 58, is currently serving a 22-year prison sentence in Oklahoma for animal cruelty and the murder-for-hire plot of his rival Carol Baskin.

But it appears Joe has been keeping himself busy behind bars with his plan for the footwear which he will call the Revenge collection in collaboration with streetwear brand Odaingerous, according to TMZ.

The shoes are thought to incorporate Joe’s personality and flair as they will come in animal print, gold and Italian leather.

The Dapper Dons are a reference to Carol’s missing husband Don Lewis and the kicks range from between £158 and £182 in price.

The shoes are available online today to celebrate the one year anniversary of the release of Tiger King on Netflix.

Meanwhile, it was recently revealed documentary maker Louis Theroux visited Joe in America as he is set to be the subject of one of his films.

Speaking of the new special, the 50-year-old said: ‘This is one of those quintessentially American stories, taking place in the heartland of Oklahoma, with a cast of characters almost too colourful and larger-than-life to be believed.

‘I spent eight or nine days filming at the park back in 2011, over the course of three separate visits.

‘I’d forgotten how much we shot until I went back into the footage during lockdown. It’s extraordinary how much was there.’

He added: ‘Since then the story just got stranger and bigger, and in going back at the end of last year, I uncovered a real-life drama that took me in directions I never could have expected.’

Why Shopify is Best Choice for Small Ecommerce Business

How to track your paper stimulus check in the mail