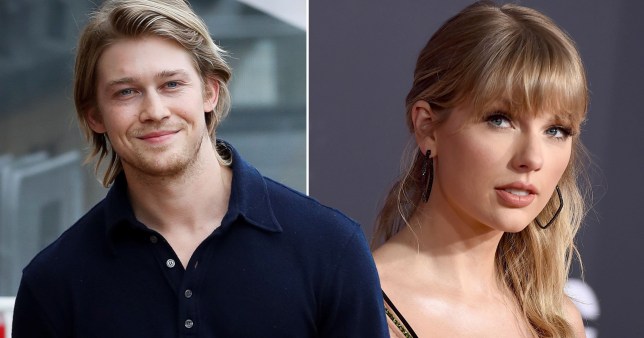 Joe Alwyn has supported his girlfriend Taylor Swift after she ripped into a ‘deeply sexist’ joke in Netflix series Ginny and Georgia.

The Love Story hitmaker was unwittingly drawn into the series during a row between Ginny (Antonia Gentry) and her mother Georgia (Brianne Howey) in the new teen drama.

In the season one finale, 15-year-old Ginny lashes out at her mum Georgia for getting into a series of complicated romances in their new town.

She snaps: ‘What do you care? You go through men quicker than Taylor Swift.’

The Love Story hitmaker was left fuming at the joke, writing on Twitter: ‘Hey Ginny & Georgia, 2010 called and it wants its lazy, deeply sexist joke back. How about we stop degrading hard working women by defining this horse s**t as Funny.’

The 31-year-old went on to reference her documentary Miss Americana, which aired on Netflix, adding: ‘Also, @netflix after Miss Americana this outfit doesn’t look cute on you. Happy Women’s History Month I guess.’ 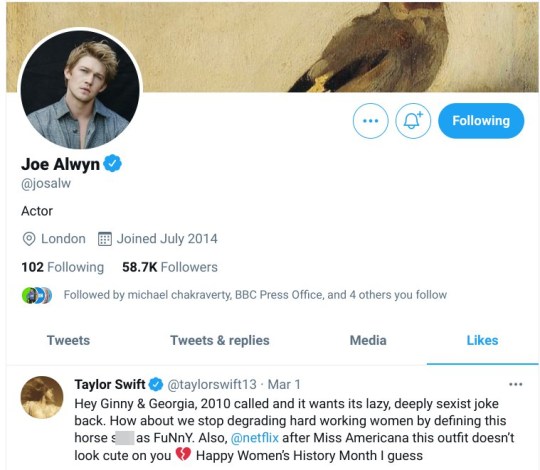 Taylor hit out at the Netflix series (Picture: Twitter)

Joe, who has dated Taylor for about four years, was one of the 600,000 people to like Taylor’s tweet.

He rarely uses Twitter, with his last tweet being in July 2018, but clearly wanted to show support for his girlfriend.

The star has also been backed by her friends and fans, with Todrick Hall tweeting: ‘Taylor has bigger balls than any man I’ve ever dated. Let’s make holding people, writers, networks accountable for treating humans like humans and not allowing them to use someone’s personal life as the butt of a joke…

‘Lastly, as actors sometimes we are just happy to be in the room, and we’ll do or say whatever we must to get the job done (I’ve done it) but times they are a-changing. If something feels wrong or unethical to you, you must speak up! Don’t let these writers make a fool out of you!

‘Also, she hasn’t dated a crazy amount of people…the joke makes no sense and not that it matters but I can think of quite a few pop stars who run through men/women like it’s cardio and no one mentions their names. The double standards are ridiculous.

‘Also, high key Joe’s been here holding it down for years. Longer than some marriages last. Writers, don’t be lazy…think of something witty or creative to say, it’s kind of your job. Taylor wrote and released two albums during quarantine already. You can write a clever line.’

Taylor’s personal life has been scrutinised for years, with the singer opening up about the criticism in an interview with Vogue

She said: ‘If I could talk to my 19-year-old self, I’d say, “Hey, you know, you’re gonna date just like a normal 20 something should be allowed to, but you’re going to be a national lightning rod for slut shaming”.’