Who Wants To Be A Millionaire? host Jeremy Clarkson cast aside his typical cynical temperament to share a heartwarming post about a contestant who recently won big on the show.

On Sunday evening, Ray Mann, a taxi driver from Edinburgh, astounded the TV show’s audience when he went home with a hefty £125,000.

Dubbed ‘the best contestant in a long time’ by viewers, Ray sought Jeremy’s help with a question about Meryl Streep’s filmography, while also correctly answering a question on Julian Fellowes after revealing that he once picked up the writer in his cab.

After Ray’s win, Jeremy shared a picture of the contestant on Instagram, at a moment when he used one of his lifelines to phone a friend.

In the picture, Ray looks utterly shocked while faced with a question about the four horsemen of the Apocalypse in the bible.

In his caption, Jeremy wrote: ‘Ray, a retired taxi driver, finding out his sister knew the answer. God, I love Millionaire for moments like this.’

Following his win, Ray said that he planned on taking his wife on a ‘nice exotic holiday’ with his £125,000 jackpot.

One viewer said they felt ‘chuffed’ for the taxi driver after his impressive performance on the ITV programme.

‘Good win for a nice guy,’ someone else said, while another viewer wrote: ‘Sometimes you end up rooting for someone. Ray Mann is a good example. Came across as a genuine good bloke.’ 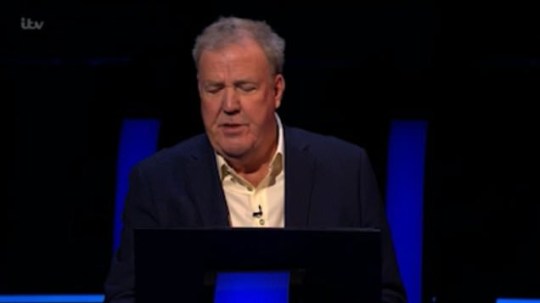 While Jeremy was clearly fond of Ray, he didn’t share the same kindness towards another contestant on Who Wants To Be A Millionaire?, bidding him a brutal farewell by saying: ‘You came, you saw, you made a mess of it.’

The player ended up leaving with £16,000, despite having the chance to win double the amount.

Another person who appeared on the show recently left with just £1,000 after deciding not to use any of their lifelines.

When the contestant was tasked with answering a question for £16,000, she decided to hasten a guess rather than phone a friend.

‘I should have used my phone a friend,’ she said before her exit.

‘Yes, you should have. That’s what they’re there for,’ Jeremy replied.

Who Wants To Be A Millionaire? is available to watch on ITV Player.