Jeopardy gameshow forced to address use of Russia-Ukraine question

American gameshow Jeopardy was forced to release a statement clarifying why a question about Russia and Ukraine made it into the programme amid the ongoing war.

On Saturday, days after Vladimir Putin first launched his attack on Ukraine, it was reported that the planned evacuation of civilians from one of the country’s most war-torn areas had been cancelled as a temporary ceasefire collapsed after just a few hours.

More than one million people have been evacuated so far, with Unicef estimating that 500,000 of those who have fled are children.

In a recent episode of Jeopardy that aired in the US, host Ken Jennings announced the clue ‘Bordering Russia’, the question for which read: ‘The Kerch Strait – along with serious border issues – separates Russia from this country on the Black Sea.’

In advance of the episode of the show airing on TV, Jeopardy released a statement on Twitter and its Instagram Story clarifying that the Russia-Ukraine-related question was recorded in January this year.

Please note the clue in today’s show concerning Russia and Ukraine was recorded on Jan. 11, 2022.

Some people on Twitter expressed how ‘spooky’ they found the question, with some questioning why the clue was not edited out of the programme or the episode removed completely. 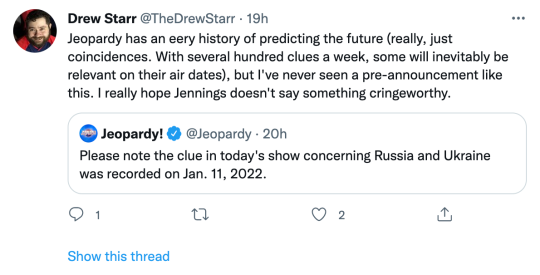 Another described the reference as a ‘spooky’ coincidence (Picture: Twitter)

Some viewers thanked Jeopardy for making the disclaimer (Picture: Twitter) 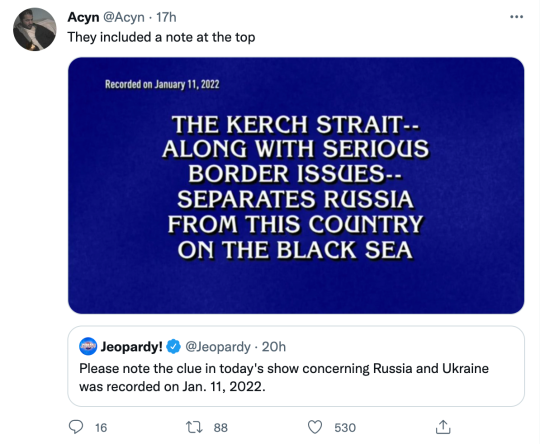 One person shared a screenshot of the moment it was shown on screen (Picture: Twitter)

‘Jeopardy has an eerie history of predicting the future (really just coincidences),’ one person tweeted, adding: ‘I’ve never seen a pre-announcement like this.’

‘Who would [have] thought they would be a major topic in the daily news only a few weeks later. Spooky,’ another remarked.

Several viewers commended Jeopardy on releasing the statement to confirm that the episode was recorded prior to the Russia-Ukraine war, with one saying: ‘I think everyone who watches Jeopardy knows these are pre-recorded. That being said, I appreciated the note on the screen clarifying this as well.’

Another shared a screenshot of the moment the question appeared to show the disclaimer that was shown on screen saying when it was recorded.

How many episodes of Killing Eve season 4 are there?