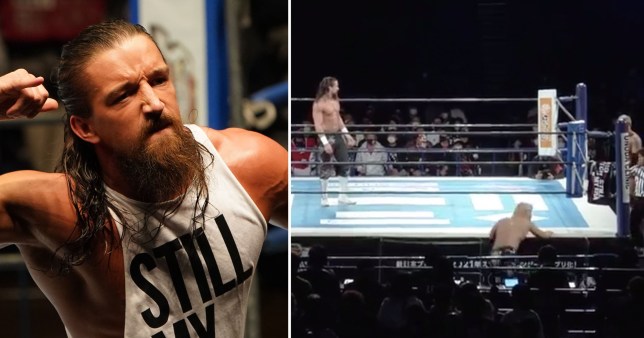 A tsunami warning has been trigged for the country’s northeast coast with the epicentre just off the coast of the Miyagi prefecture – the same area that was heavily damaged during the huge earthquake and tsunami of 2011 – while buildings in Tokyo were shaking with the US Geological Survey putting the strength at magnitude 7.2.

Fans were stunned when a six-man tag team match with the trio of Kazuchika Okada, Hiroshi Tanahashi and Kota Ibushi taking on Yukiro Takahashi, KENTA and Jay White.

The match had been going for almost four minutes when the earthquake it.

News of the interrupted quickly spread on social media, with the New Japan Cup event delayed as safety checks were carried out.

During that time, the wrestlers posed for photos for the fans and kept the audience entertained.

It was eventually decided that the show could continue around 20 minutes later, and the action resumed with the six-man tag match continuing for another seven minutes.

The show was postponed for more than 20 minutes (Photo: NJCUP)

Dark Side of the Ring researcher and reporter David Bixenspan tweeted: ‘Am earthquake interrupting the NJPW show is just about the damnedest thing I’ve ever seen (sic).’

He later added: ‘I have immense respect for @realkevinkelly, @reasonjp, and @MrGinoGambino as broadcasters right now. They filled the time during that earthquake-induced hiatus like it was nothing.’

And 411Mania writer Ian Hamilton added: ‘Been watching wrestling for almost 30 years, and I’ve never even *heard* of this, let alone seen it’.

Fans were stunned on social media, with one tweeted: ‘Damn earthquake in the middle of the match. Scary af #njpw.’

Another said: ‘Wow that was pretty surreal and very scary! Earthquake in the middle of a match! At least everyone is ok thankfully! Folded hands #njcup #njpw #njpwworld (sic).’

A different user wrote: ‘Legit scary stuff here. An earthquake just interrupted the New Japan Cup semi final show, as the match between Okada, Tanahashi, and Ibushi against Bullet Club is on a pause. #njcup #njpw.’