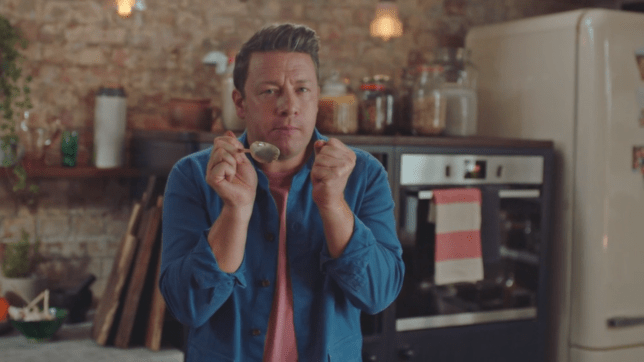 The TV chef presented a budget version of his One Pan Wonder show, with new money-saving recipes (Picture: Channel 4)

Viewers tuning in to Jamie Oliver’s new budget-friendly programme Jamie’s £1 Wonders on Monday were not entirely convinced by the price breakdowns of the meal ingredients the celebrity chef was sharing.

Reacting to the cost-of-living crisis, Jamie introduced ways to stretch a Bolognese with lentils, cooked a full curry meal in a microwave and produced a meat loaf on the hob, all with the guarantee that each recipe came in at under a single pound per portion.

At the end of each segment, the full list of ingredients was flashed up on screen, with price breakdowns ‘taken from an average of the four biggest UK supermarkets, correct as of September 2022’.

However, not all fans were convinced by these claims, wondering which shops were being used and pointing out that the prices came from upfront purchases of larger quantities in the majority of instances.

For example, the TV star’s 50/50 Bolognese came in at a total cost of £11.52 but was cooked in a large enough quantity to serve 12, allowing it to make the claim of 96p per portion.

‘Cost breakdown isn’t left on screen for long on #jamiesonepoundwonders. Very hard to know if it’s realistic,’ commented one viewer, while another asked: ‘Anyone else thinking Jamie’s got his pricing wrong on #JamiesOnePoundWonders?’ 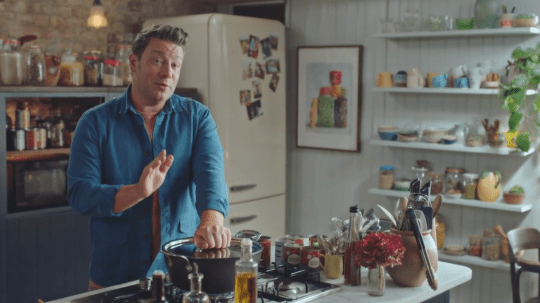 Not all viewers were convinced by the cost breakdown of each meal (Picture: Channel 4) 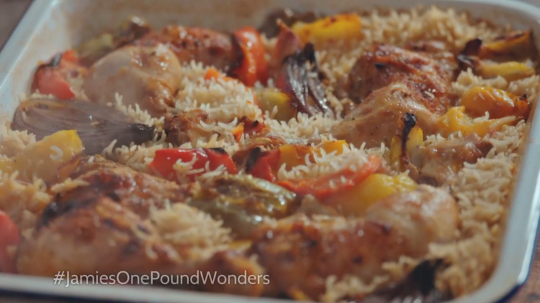 One fan had a cheeky offer, tweeting: ‘@jamieoliver lad, next time you go shopping can I come? No idea what isle [sic] you’re finding these bargains. Happy to lower my TV appearance fee if want to air it.’

One ingredient that seemed to particularly rile viewers was the show’s claim that you could get four chicken thighs for £1.83.

‘Four chicken legs for £1.83 is the only thing that’s optimistic in that meal,’ quipped a viewer, playing on Jamie’s new favourite word, while a second praised the ‘lovely healthy and fresh’ meals but added: ‘Whoever is doing the average pricing between the four major supermarkets needs a slap! Four chicken legs for £1.89? Where from?? and what quality of meat is this. Same for the cheese!’

However, other tweets pointed out that chicken legs could be purchased frozen from Marks & Spencer in a pack of eight for £2, while Sainsbury’s and Aldi currently sell 1kg fresh for £1.99.

Cost breakdown isnât left on screen for long on #jamiesonepoundwonders. Very hard to know if itâs realistic, but great recipes to help with low cost cooking.

Where the hell is he shopping?#JamiesOnePoundWonders

Others questioned the concept too though, for the same recipe.

‘He’s costing things per amount used in the recipe and failing to mention that you have to buy the entire product in the first place,’ read one response, criticising the method.

Similar questions were asked about the two red onions at 17p and three peppers for 57p, but many were pointing to stores like Lidl and Aldi in response. 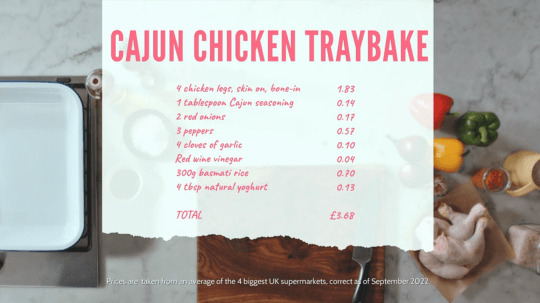 The meal, as others, priced from a bulk purchase of ingredients and then worked out the cost per amount used in the recipe (Picture: Channel 4)

While some viewers were also annoyed by the ‘tad disingenuous’ addition of balsamic vinegar and grated cheddar to finish, and the use of pantry ingredients for spice and flavour, others were here to defend the chef’s efforts.

‘I don’t think the pricing is off. People keep tweeting “Where on earth can you get X for £Y?” and I’m thinking “Aldi!” tweeted one fan.

Another added: ‘So many tweets snarking about @jamieoliver but you’d be surprised how many people have NO clue about cooking or budgeting.’

Someone clapped back: ‘He has no idea either. He is costing things per amount used in the recipe… how do you buy 33p worth of cheese for example? 4p worth of herbs? It’s the initial cost outlay of the full product and all the ‘cupboard staples’ that some people can’t afford.’

However, a third person reasoned: ‘I reckon we are all having to think a bit more imaginatively and jamie’s come up with some interesting ideas even for those of us who are seasoned meal planners.’

Jamie’s £1 Wonders is available to watch on All 4.