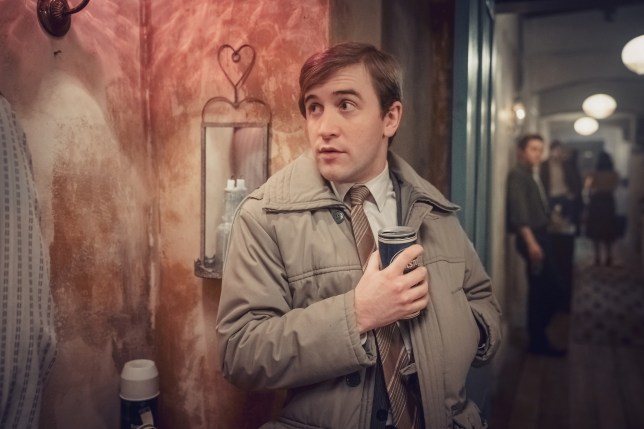 Callum stars as Colin in the acclaimed drama (Picture: Channel 4)

It’s A Sin star Callum Scott Howells has spoken about his experiences behind the scenes on the show, revealing the hardest scene to film.

The series created and written by Russell T Davies provided viewers with some of the most uplifting and heartbreaking moments on TV over recent years – and it’s no surprise that some of the scenes were as hard to film as they were to watch.

Callum’s character Colin was at the centre of one of the most emotional storylines within the show, but the hardest scene to make might not be one viewers expect.

The series sees Colin head on a work trip with his boss Mr Hart played by Nicholas Bane. During one uncomfortable sequence, Mr Hart enters Colin’s hotel room and urges the younger man to sit next to him.

He then leaves after seeing the magazines Colin is reading about the AIDS crisis.

Callum said he found it a challenge to film the scene because actor Nicholas is so unlike the problematic character he is portraying.

It’s A Sin shows the devastating effect of the aids pandemic (Picture: Channel 4)

Speaking to Digital Spy, he said: ‘Those scenes were really hard to film because Nick is so gorgeous as a person. You look at it, and you think, “Gosh, Mr Hart is such a bastard’, but he’s played by the loveliest of men.”’

Callum added: ‘Nick, who plays Mr Hart… He’s one of the most beautiful men ever, [and] he’s so experienced. He’s done Game of Thrones and everything. He’s the Spice King! Can you believe it? He’s amazing.’

He went on to say: ‘We really worked on that dynamic of Colin and Mr Hart. It’s very complicated, that relationship.’

It’s a Sin tells the story of young adults living in London as they navigate the HIV and Aids epidemic that hit the city between 1981 and 1991, exploring an often ignored time in recent history.

It’s a Sin is available to watch now on All 4.