On season one of Drag Race UK, which aired in 2019, Baga Chipz, Blu Hydrangea, and Divina de Campo came together to form Frock Destroyers, going up against Filth Harmony to perform their own version of Break Up (Bye Bye).

Frock Destroyers has since continued to make its mark in the music industry, with Break Up (Bye Bye) reaching number 35 on the UK Singles Chart and the band’s debut album being released in December last year.

The group’s performance on Drag Race UK was nothing short of iconic, with fans of the show learning their routine and verses by heart, including Callum, who plays the lovable Colin on It’s A Sin, a TV series set in London in the 1980s amid the Aids crisis.

Omari Douglas, who portrays the outgoing Roscoe in the Russell T Davies drama, recently shared a video on Instagram of Callum dressed in character struggling to remember the words to the song as he mimicked the choreography.

The clip began circulating on Twitter, catching the eye of Baga who had just one word to describe it: ‘AMAZING!’

Divina also commented on the video on Instagram with a row of heart-eyed emojis, while Blu shared it on her Instagram Story.

Several fans of It’s A Sin and Drag Race UK expressed their delight over the crossover between the two shows. 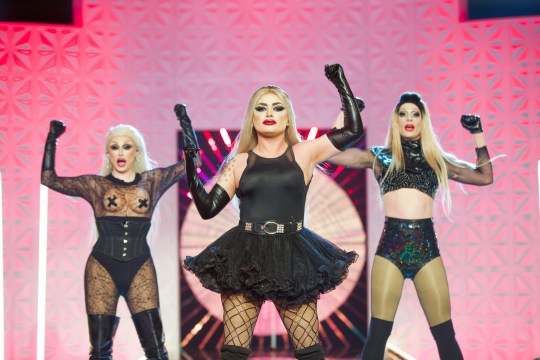 ‘How is he the cutest wee button to have ever lived?’ one person tweeted in response to the video.

‘He melts my heart,’ another commented.

Someone else described Callum as ‘just the most adorable human’, while another wrote: ‘He’s even precious in real life.’

During a recent interview, Callum shared that he lost two of his grandparents to coronavirus.

Speaking to The Independent, the 21-year-old said: ‘‘I’m fighting for my grandparents. They were the biggest part of my life.

‘People deny that Covid-19 is real? I can tell you it is real because my grandparents are dead. Sorry, I know that’s really brutal. I’m sorry if you find this too direct.’

It’s A Sin returns next Friday at 9pm on Channel 4 and is available to watch on All 4.