Kourtney, 42, has been giving fans a tour of her LA home on social media.

Travis made out with Kourtney on a staircaseCredit: Instagram 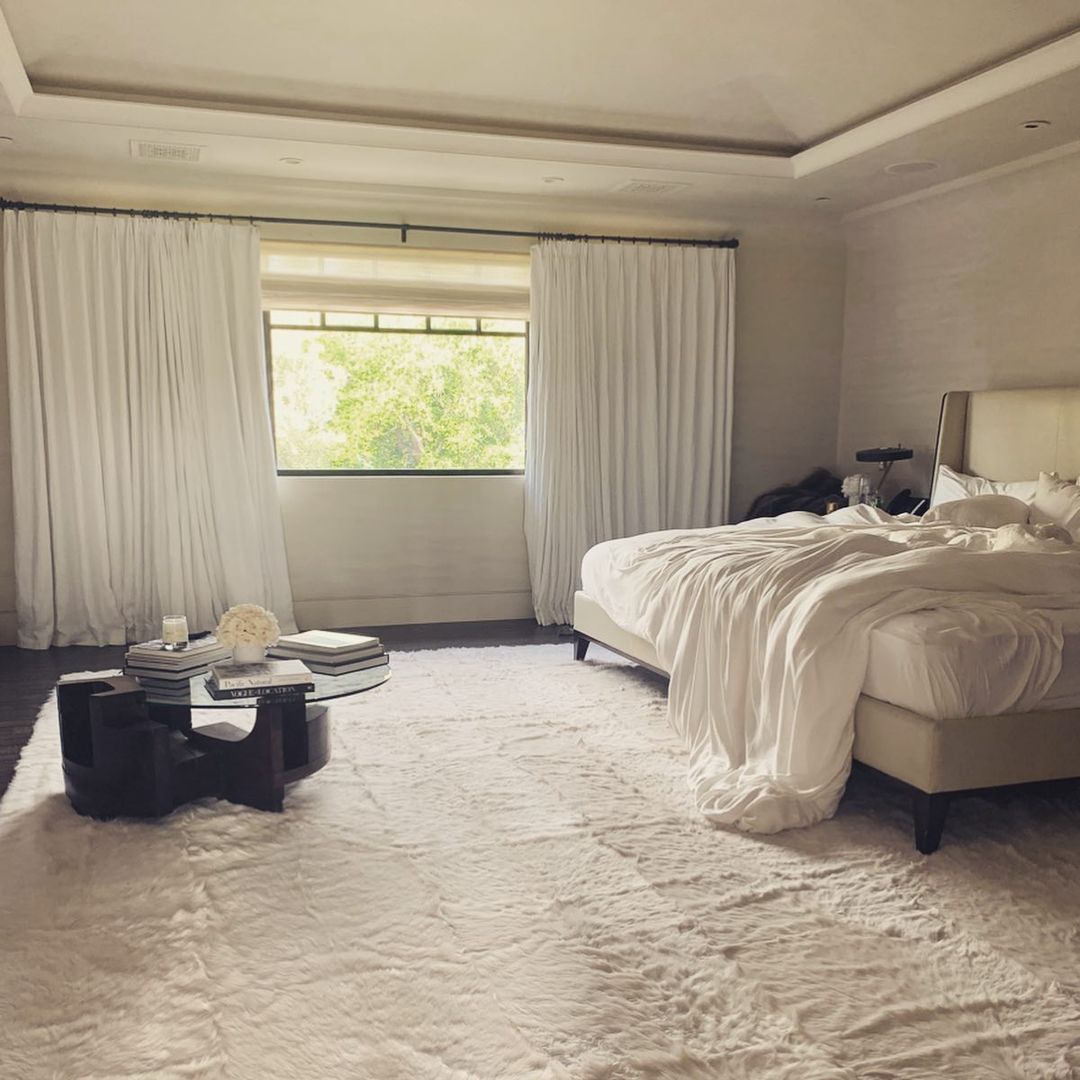 The bedroom has a view of the Casablancas hillsCredit: Instagram/Kourtney Kardashian

Nicknamed Kravis by fans, the Keeping Up With The Kardashians star has become the picture of happiness while living with her beau Travis, 45.

In a sexy snapshot, the two even ended up making out on a staircase.

Kourtney previously decorated her home – which she used to share with ex Scott Disick – with the help of English designer, Martyn Lawrence Bullard.

The reality star and Martyn had gathered multiple vintage pieces from all over the world to add to her space.

The eldest Kardashian sister bought the Calabasas home back in 2014 from retired football player Keyshawn Johnson for $7.45 million.

The Calabasas home might be a perfect love nest now that The Sun exclusively revealed that Kourtney and Travis are reportedly engaged after he proposed in Las Vegas.

The Blink-182 drummer got down on one knee to ask his girlfriend of seven months to marry him during a trip to watch a UFC fight, a source said – and the couple plans to marry later this year.

“I think Travis has been planning the proposal for ages,” said a source close to the eldest Kardashian sister.

“They want to start their own family together. That is the bigger thing for them because they both have kids, but they want to bring the two families together.”

As their relationship has gotten spicy, a few KUWTK fans believed Kourtney was already expecting her fourth child, especially when she shared a video of her receiving a delivery from Buy Buy Baby. 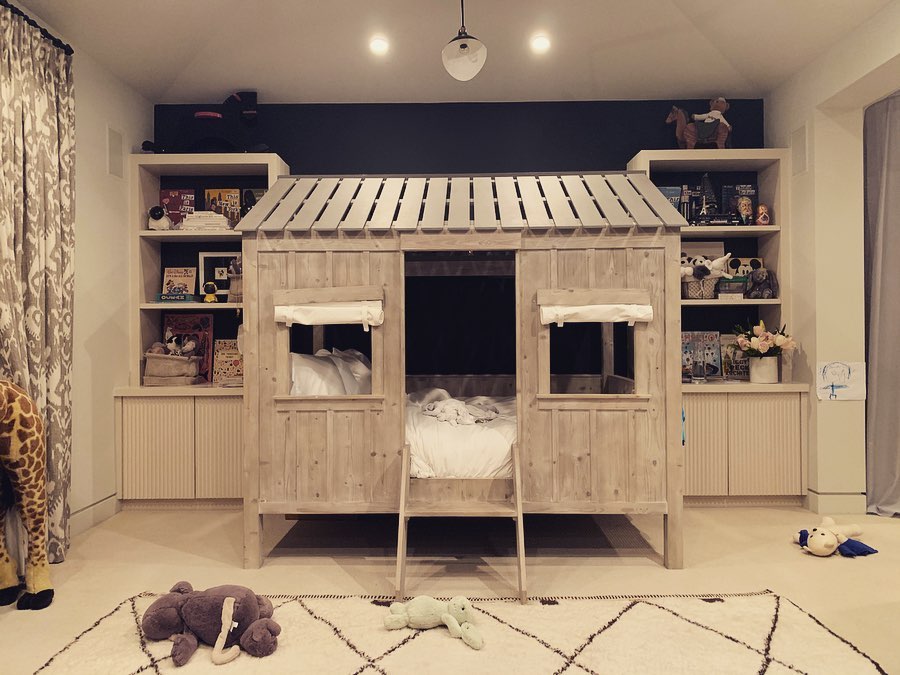 The children have a play room for their belongingsCredit: Instagram/Kourtney Kardashian

According to public records, the Casablancas home has about six bedrooms, seven bathrooms, a home theater, a spa, an exercise room with a sauna, a four-car garage, a long swimming pool, and stunning views of the hills.

The outside of the home was decorated with arches of greenery and desert plants that suit California living.

Once inside the home, there is an entryway that gives a preview of the home’s aesthetic. The walls include floor-to-ceiling windows with dark frames.

Above the custom-made center table, there was a vintage chandelier that draws the eye to the second-floor hallway balconies.

The table was surrounded by sheep-skin stools with a view to the backyard.

The main living room space was used to celebrate the family’s special occasions such as New Year’s Eve and Christmas day.

It had white and grey leather couches with plenty of fluffy throw pillows, an open-logged fireplace, Kris Jenner’s Yamaha piano, and a pool table.

Each room was cluttered with some of her children’s toys that are left behind after playdates.

She even had a dedicated room in the house for the children to play and read.

Kourtney had also designated one of the rooms as her home office to work on her lifestyle brand, Poosh.

The home office included double doors that lead into the backyard, two wooden chairs for guests to sit on, an open log fireplace, and a big desk.

Kourtney’s bedroom is also fit for a queen – as she had a big screen TV over a fireplace, white walls, and a big fluffy bed where she can cuddle with all of her children.

Each room also featured fresh flowers and green plants on every surface.

Like the rest of the Kardashians, Kourtney had a hefty walk-in wardrobe with open-shelving, big mirrors, and a whole display of shoes.

The guest rooms and the bathrooms have a hotel aesthetic, complete with fluffy bathrobes, clean countertops, big mirrors, and fresh flowers.

She has plenty of places for her kids to have fun, like inflatables in the backyard and a basketball court for her workouts. 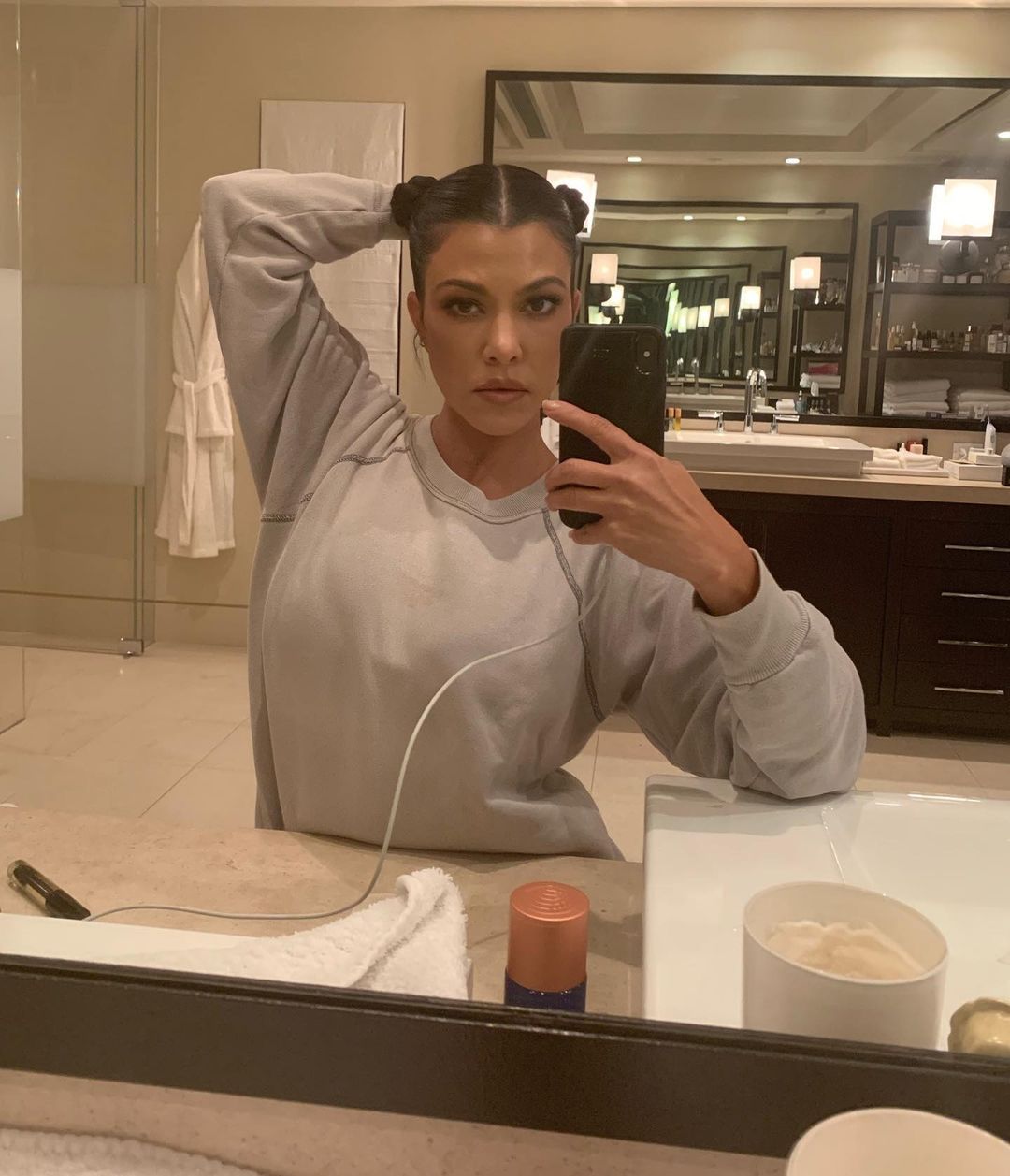 The reality star is a mother to Mason, 11, Penelope, eight, and Reign, six, with Scott.

Travis shares his daughter Alabama, 15, and his son Landon, 17, with his ex-wife Shanna Moakler.

During an Instagram live session, Alabama was playing the Never Have I Ever game with a group of friends.

She shouted out: “Stepmom!” after her friend mentioned he had “never met a Kardashian.” 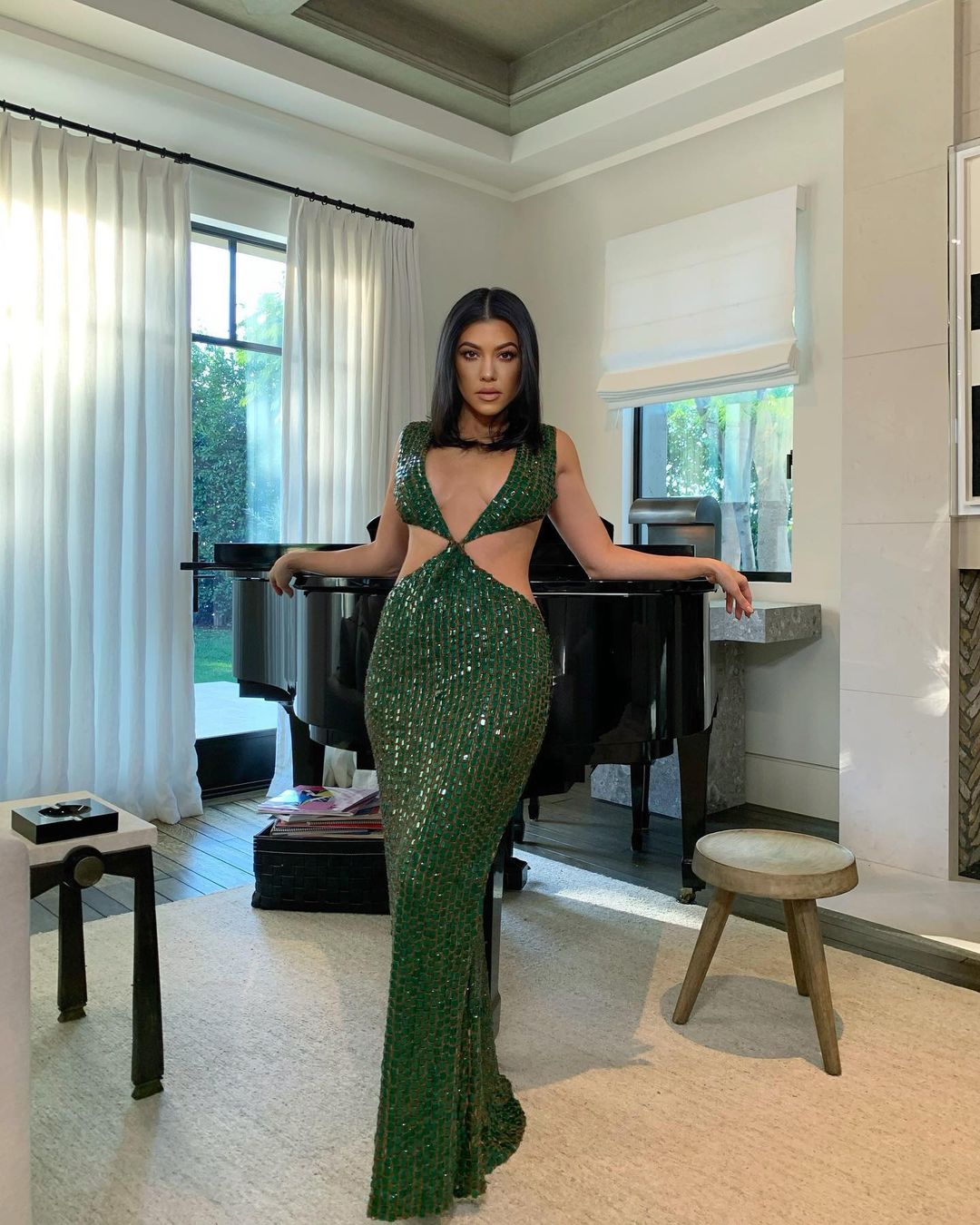 Kourtney leaned against the piano as she modeled a green dressCredit: Instagram/Kourtney Kardashian 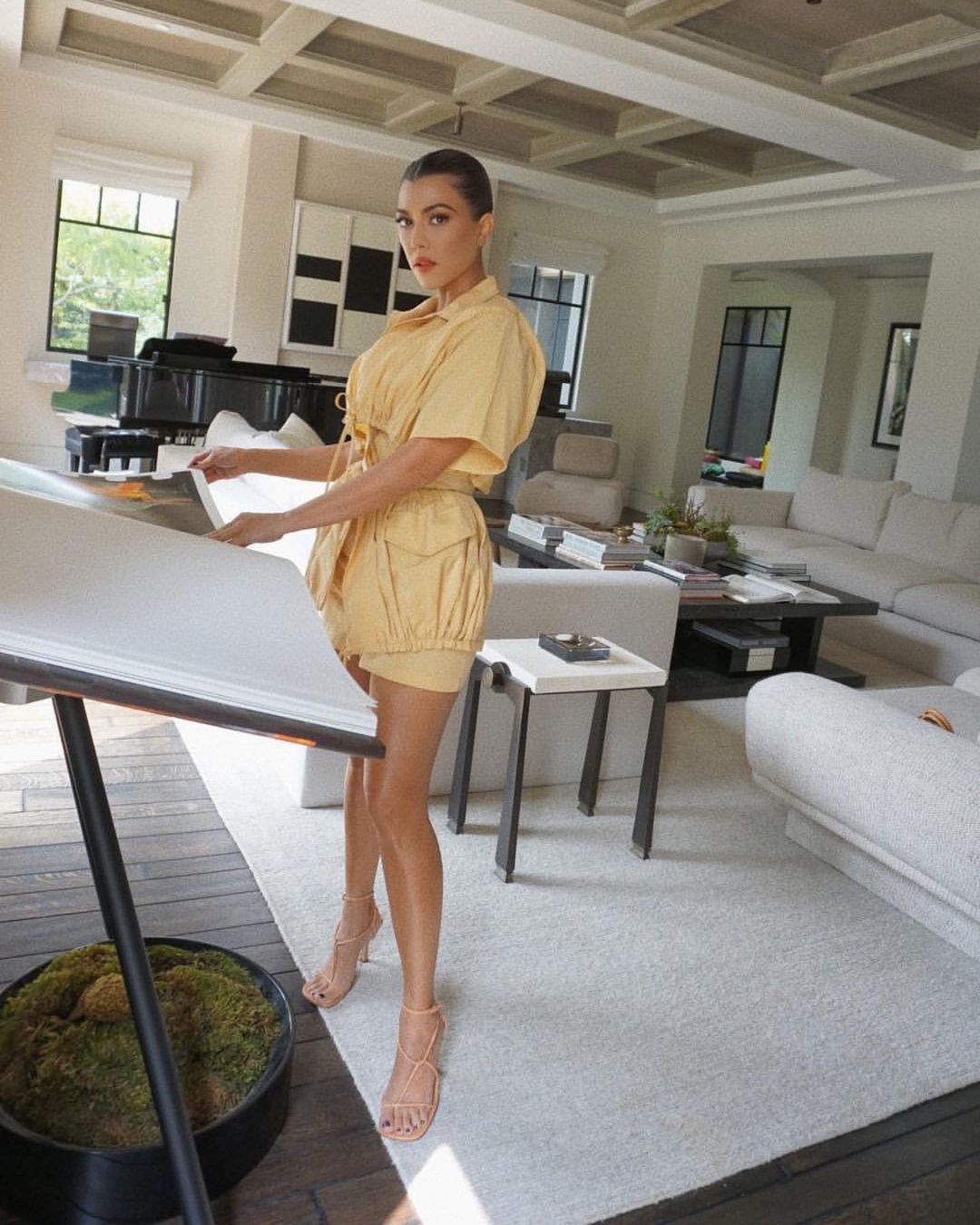 Kourtney has an office in her homeCredit: Instagram/Kourtney Kardashian 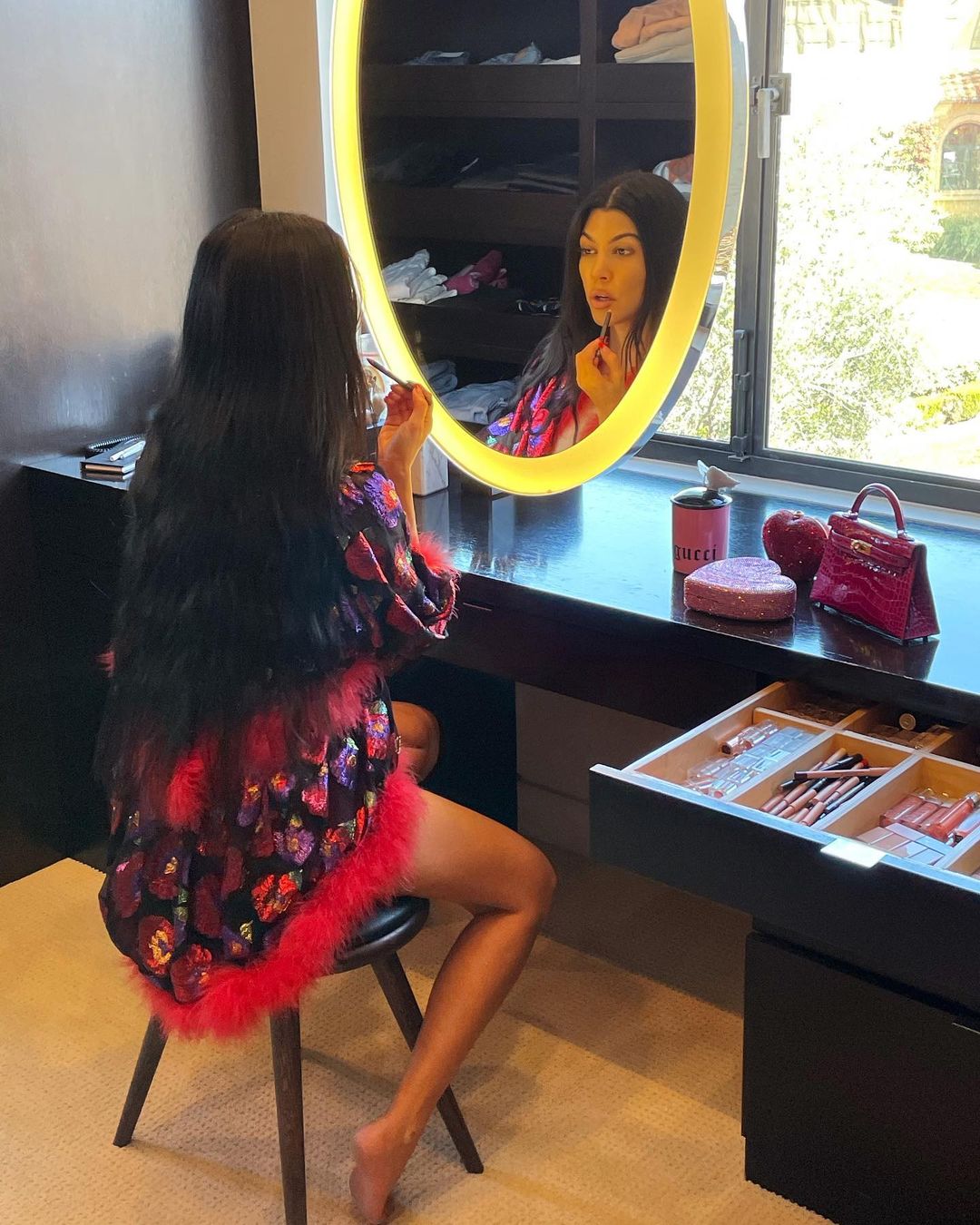 Kourtney painted her face in front of a mirrorCredit: Instagram/Kourtney Kardashian 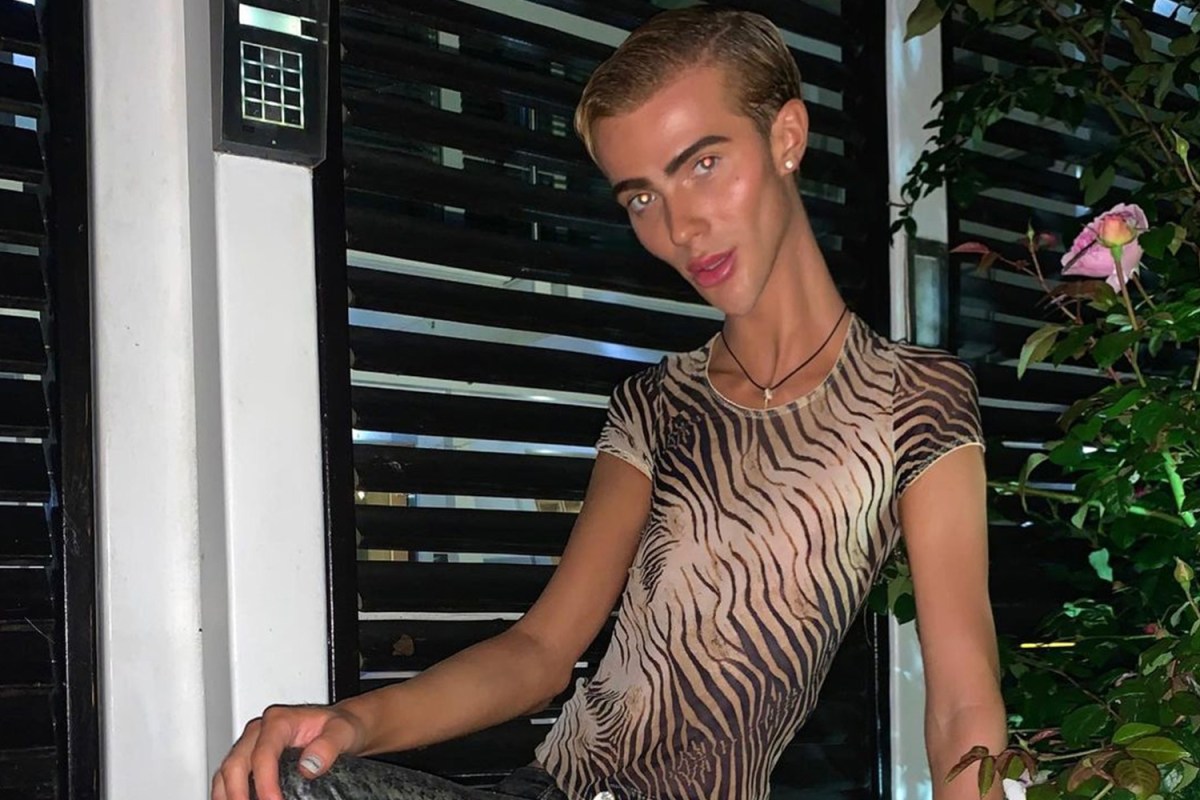