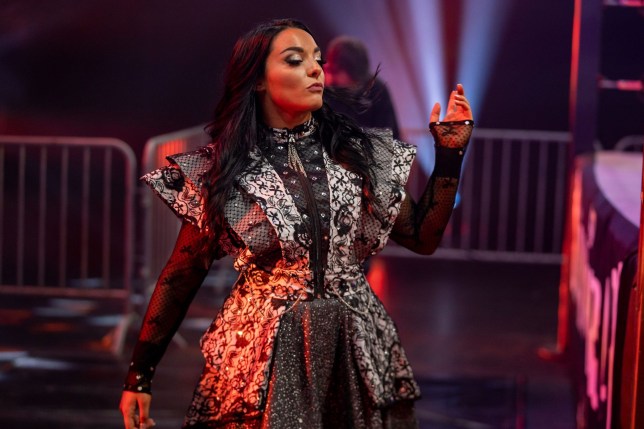 The Virtuosa is loving her home in IMPACT (Photo: IMPACT Wrestling)

Deonna Purrazzo is thriving in IMPACT Wrestling after rediscovering her childhood passion.

In April 2020, the talented star – who made her name in promotions like Ring of Honor – was released from her contract in WWE after feeling ‘defeated’ by the lack of opportunities during her run in the rival promotion.

However, a year later she is standing tall over IMPACT’s Knockouts division with the championship around her waist and feels revitalised by her surroundings.

She exclusively told Metro.co.uk: ‘It’s kinda been a lifelong dream to be in the position I’m in and to invoke that emotion out of people. That, as a child, is really what hooked me!’

Now leading the charge in IMPACT, Deonna – who defends her Knockouts Title against Tenille Dashwood at Rebellion on April 25 – first became a fan after seeing ‘Stone Cold’ Steve Austin hitting Chris Jericho with a steel chair.

‘I don’t know if it actually happened, but those are the two wrestlers in my head that it must’ve been,’ she laughed. ‘Of course, I thought it was real! That moment was like… what is this? This is a whole new world, and it’s wild!

‘And then I got to see the women do it, and I was like, “That’s really cool!” Then we saw Trish and Mickey, Trish and Lita, and all these storylines that pushed women’s wrestling to the forefront.’

This turned her into a lifelong fan, and the era of Bra & Panties matches and Playboy Bunny pillow fights pushed her even further as she wanted to ‘create a change’ to unlock the potential of women’s wrestling.

However, Deonna admits that by the end of her stint with WWE – which ran from May 2018 to April 2020 – she had become disillusioned with the business and started to doubt her own talents.

‘Honestly, it was hard,’ she admitted. ‘About halfway through my NXT run, I looked at myself and I was like, do I even love this anymore?

‘Do I even wanna be a wrestler anymore? I just felt defeated in myself as a human being, in the choices I was making in wrestling itself I was super unsure.’

She hit a point where she started getting vocal about her displeasure, and her passion quickly returned when she was released and felt the outpouring of love from her fans.

‘They were so excited to see me move onto whatever my next stage in life would be,’ she beamed. ‘It was like, OK I can do this. I knew I could do this. I was kinda unsure and doubted it a bit, but hell no, they’re not right!’ 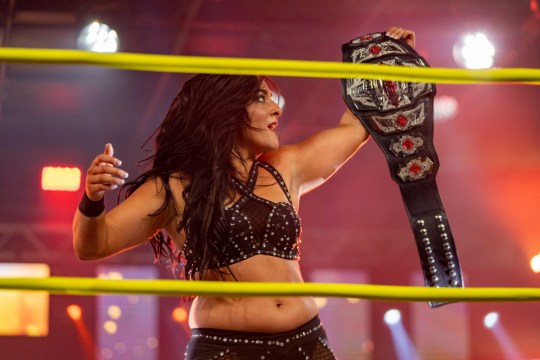 Deonna has held the gold for much of the past year (Photo: IMPACT Wrestling)

Being at the top of the Knockouts division has helped, with Deonna getting the creative freedom to really develop her on-screen character of the Virtuosa.

‘Everyone seems to understand who I am and what this character can bring to the table,’ she explained. ‘I’m just happy the Knockouts division is the forefront in IMPACT Wrestling.

‘We’re given the leeway to do whatever we want, and go all out and prove why women’s wrestling is the best wrestling.’

Deonna – who recently defeated wrestling legend Jazz in her retirement match at Hardcore Justice – still gets flustered before big matches, and spends weeks planning out her gear, any new moves or other tweaks to give fans something new.

She laughed: ‘I’m pretty calm all day for the most part, and then as soon as the bell rings for the match before me to be over, I get flustered.

Stepping through the curtain, all that washes over her and she does what she does best – and what she’s dreamed of her whole life.

‘I’ve wanted to wrestle since I was a little girl. Since I was nine, I was always like, “Oh it’s fine, I’m going to be a professional wrestler, I don’t need to learn that, I’m gonna be a wrestler!” No one, I don’t think, should go into anything without wanting to be the best,’ she smiled.

‘The last year has 100% reinvigorated all of the passion I had as a child. All the passions I had when I was 18 learning to wrestle and going to school and juggling a full time job.

‘Now, I’m just in a place of peace and happiness and drive and passion. I think I’m doing my best work finally now!’