Frankie is reportedly set to go on the show later this month (Picture: ITV/Rex/Shutterstock)

Former The Saturdays member and Loose Women star Frankie Bridge has gone straight to the top of the bookies’ odds as speculation heightens over this year’s I’m A Celebrity… Get Me Out of Here! line-up.

Frankie is amongst the 13 names who have reportedly all signed-up to face their fears at Gwrych Castle as the show returns in just over two weeks’ time.

Other names who are thought to be appearing on the show include Emmerdale’s Danny Miller, EastEnders legend Adam Woodyatt and former Strictly Come Dancing judge, Arlene Phillips.

The former pop star is expected to fare better on the hit ITV show than husband Wayne Bridge managed in 2016 as the 4/1 front runner, according to bookmakers Ladbrokes.

He ended up coming in fifth place on the show back in 2016, which was eventually won by Gogglebox star, Scarlett Moffatt.

Jessica O’Reilly of Ladbrokes said: ‘Frankie’s the early favourite to win I’m A Celebrity as long as she can put with up the cold and the creepy crawlies Gwrych Castle has to offer.’ 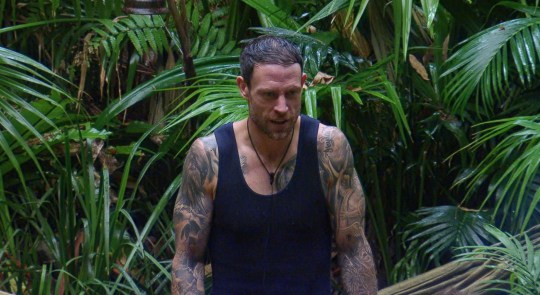 Wayne came fifth on the show in 2016 (Picture: ITV/Rex/Shutterstock)

But it seems she’s set to have tough competition. Danny is next in the betting with the bookies at 6/1, while fellow soap actors, Coronation Street’s Simon Gregson and Adam follow at 9/1 and 10/1 respectively.

Her name came out in the list everyone’s been waiting for, but it doesn’t seem her famous husband will be much help, due to the show now taking place in a completely different location.

A source told The Sun: ‘Wayne really enjoyed his time in the Australian jungle, and Frankie is looking forward to giving the show a go too. She is pretty excited.’

The insider also told the publication Frankie was said to be ‘nervous’ about leaving Wayne, and their two sons Parker and Carter, for potentially up to a few weeks.

But they noted: ‘Though with the show in Wales this year, Wayne unfortunately won’t be much help for tips.’

Could Frankie be set to become the second Queen of the Castle if she does indeed end up with a spot on the show?

An ITV spokesperson declined to comment on speculation, and told Metro.co.uk the line-up will be revealed ‘in due course.’

I’m A Celebrity…Get Me Out Of Here returns Sunday, November 21 to ITV.

Council meeting abandoned after descending into chaos with police called