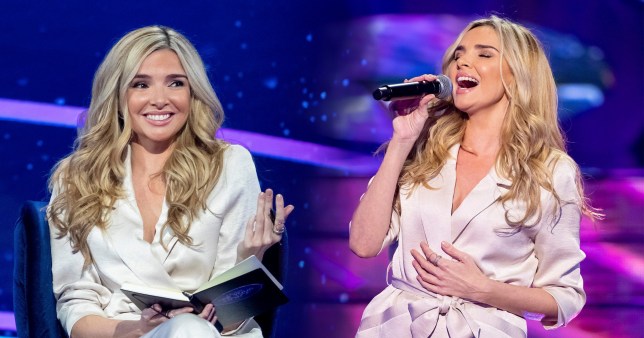 Viewers were absolutely loving Nadine on the show (Picture: BBC)

I Can See Your Voice viewers were in hysterics as special guest star Nadine Coyle appeared to make a NSFW comment about a contestant on the BBC music game show.

On the latest episode of the programme, former Girls Aloud member Nadine joined judges Jimmy Carr, Amanda Holden and Alison Hammond to see whether they could correctly guess which contestants are good singers without hearing their real voice.

At the very start of the show, they were introduced to the line-up, one of whom claims to play the guitar.

While assessing from first impression whether he could be a good singer, Nadine stated: ‘He also has a crooner wink going on.’

However, some viewers thought that they heard the Irish singer say a racy word beginning with w, which rhymes with bank.

‘A crooner’s what?!?!’ one viewer tweeted incredulously, with a bashful emoji.

‘WINK. She said WINK everybody,’ another stated.

‘Crooners wink not crooners w**k,’ someone else explained, while another viewer said: ‘Not them thinking Nadine said w***.’

Presenter Paddy McGuinness and the I Can See Your Voice judges were similarly entertained by the miscommunication.

‘Excuse me?!’ the Top Gear star said after Nadine made her comment.

‘I’m so sorry,’ Amanda chimed in, before bursting into laughing.

During Nadine’s appearance on the show, Jimmy took the opportunity to make a jibe about her Girls Aloud bandmate Cheryl, while discussing the contestants’ lip syncing performances.

When Paddy asked the judges how they’re doing, Jimmy jokingly said that he was ‘a little bit disappointed that Nadine’s here’.

‘I thought, if we wanted someone that knows about lip syncing, should have got Cheryl,’ the comedian added.

While the other judges looked equally shocked and amused, Nadine wasn’t having it, retorting: ‘We’ve only just started the show!’

‘I start as I mean to go on. She’ll be alright,’ Jimmy replied.

On tonight’s show, sisters Jen and Nadine walked away with £10,000 after successfully distinguishing between the good singers and the bad.

I Can See Your Voice returns next Saturday at 7.25pm on BBC One.