This Morning’s presenters Holly Willoughby and Phillip Schofield were aghast by the story of a ‘sadistic’ murderer who placed his prosthetic eye into a guest’s food.

On Wednesday’s edition of the ITV talk show, Holly and Phillip welcomed Kerry Daynes on for a virtual chat.

Kerry is a forensic psychologist who has over 20 years of experience working in intense environments including prisons, police stations and secure hospitals.

During their conversation, Kerry recalled one dangerous individual who she used to work with on a rehabilitation ward, ‘an elderly man who had killed two women’.

Explaining that the man had a prosthetic eye, Kerry said that on one occasion, ‘he came up behind me while I was eating my lunch, which very unfortunately was a tin of tomato soup, and he popped his prosthetic eye out into my lunch’. 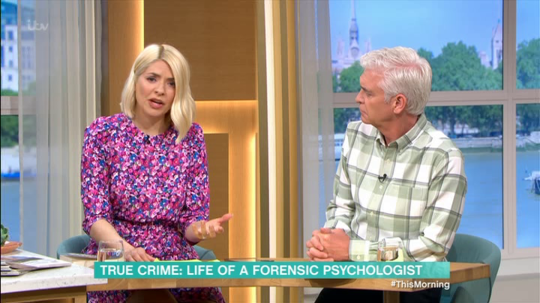 Not only is the idea of a fake eye in a bowl of soup absolutely disgusting, but Kerry added that it was made worse by the fact that it was tomato soup, as ‘red splattered everywhere’.

‘And when your lunch is staring back at you, you don’t think logically, you don’t think well this is nothing more than a giant marble, it’s just a piece of glass. As far as you’re concerned, it’s an eyeball, it’s a jelly piece of somebody’s body.’

Holly shook her head as she heard Kerry’s story, turning her face to the side as she visualised what occurred.

On that first instance, Kerry couldn’t hide her horror, giving the man ‘exactly the reaction that he wanted’ by screaming. 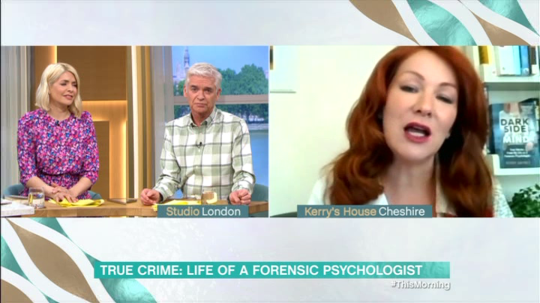 However, after having it done to her several times, she eventually reached the point where she would ‘scoop his eyeball out of my lunch, put it to the side of my plate and carry on eating’, with the murderer eventually stopping his revolting habit.

While Holly and Phillip looked shocked by Kerry’s story, the eyeball prank wasn’t the most startling admission that she made.

At another point in her career, the forensic psychologist was ‘stabbed with a kebab skewer’.

While she said that it’s ‘not quite as dramatic as it sounds’ as ‘it didn’t do a great deal of harm luckily’, Holly and Phillip were taken aback by the story.

But Kerry’s colleagues made a joke of it at the time, nicknaming her ‘doner’ for several weeks.

In her opinion, she would be in a ‘much more dangerous environment’ if she were to work as a nurse, bus driver or a medical worker in A&E.