Harry Hill has got us all emotional in the most unexpected of ways, as he’s seen hugging a tree in a new episode of Grayson Perry’s Art Club.

Seriously – stick with us here.

We’re all missing someone amid the coronavirus pandemic, and hugging has gone out of fashion like no one’s business, so the comic led a squad of his celeb friends to stick a picture of someone they miss to a tree and hug it.

It’s definitely as bizarre as it sounds but Harry completely broke our hearts as he got tearful while hugging a representation of his mum.

‘I love you mum,’ he said as he choked up during the clip, which has been exclusively shared with Metro.co.uk.

Meanwhile, the other celebs definitely had fun with the project, as Alex Horne stuck a snap of his Taskmaster co-star Greg Davies high up in the branches of the tree (we can only assume that’s to scale with his actual height).

Joe Lycett took a moment to plant a kiss on his houseplant, which was of course a representation of Lord Alan Sugar (who else?!), while Johnny Vegas did the most, by sticking three framed photos up a tree.

The Channel 4 series shows artist Grayson Perry attempting to bring people together through art in the midst of the coronavirus lockdown. 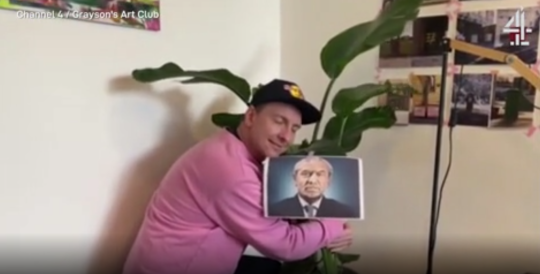 Joe had a moment with his representation of Lord Alan Sugar (Picture: Channel 4)

Russell Tovey, Sophie Ellis-Bextor, Konnie Huq, and Nigella Lawson are just some of the stars who have taken part, with Boy George blowing people away with his artwork in the first episode.

Sharing an insight into the process, Boy George said: ‘When I did the mouth I was worried I was going to ruin it, but I actually really love the mouth now. It’s got kind of quite a demented look about it. She’s as mad as a box of socks.’

Grayson remarked that the use of face jewels makes him feel ‘very nostalgic’, adding: ‘I’m a big fan of the face jewel.’

Boy George added: ‘When you start beading it, it kind of takes something quite ordinary and makes it quite emotional.’