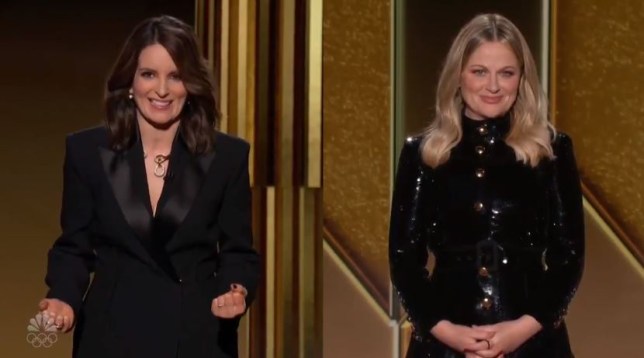 Tina Fey and Amy Poehler called out the Hollywood Foreign Press Association for not having any Black members (Picture: NBC)

Golden Globes 2021 hosts Tina Fey and Amy Poehler weren’t afraid to call out the Hollywood Foreign Press Association about the ongoing backlash over the organization’s lack of Black members.

The organization’s diversity issue made headlines ahead of the ceremony after several high-profile stars called for a #TimesUpGlobes movement last week.

Celebrities and fans alike revealed their shock at the fact there isn’t a single Black person in their organization out of 87 members.

During their opening monologue on Sunday night, the ceremony’s host addressed the issue as Tina stated: ‘We all know award shows are stupid.’

Amy quipped, ‘They’re all a scam invented by Big Red Carpet’ as Tina continued: ‘The point is, even with stupid things, inclusivity is important. And there are no Black members of the Hollywood Foreign Press.’

She then stressed: ‘I realize HFPA, maybe you guys didn’t get the memo because your workplace is the back booth of a French McDonald’s. But, you’ve got to change that, so here’s to changing it.’

VP Helen began: ‘On behalf of the Hollywood Foreign Press Association, thank you for joining us tonight to celebrate the work of artists from around the globe, we recognize we have our own work to do. Just like in film and television, Black representation is vital. We must have Black journalists in our organization.

Former president Meher continued: ‘We must also ensure everyone from all underrepresented communities gets a seat at our table, and we are going to make that happen.’

President Ali concluded: ‘That means creating an environment where a diverse membership is the norm, not the exception. Thank you and we look forward to a more inclusive future.’