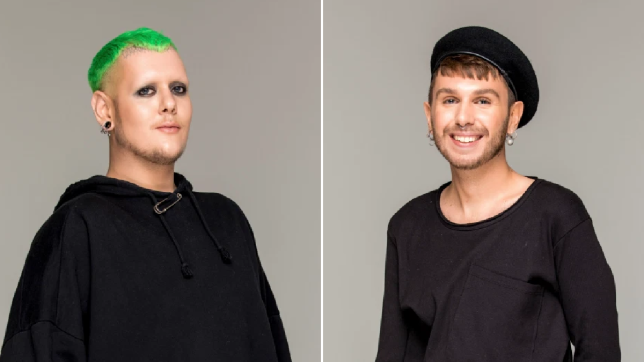 Glow Up series 3 star Elliott has known fellow contestant Jack for 10 years and was actually inspired by them to tear up the make-up industry.

Elliott became the second make-up artist to be eliminated from the current chapter by judges Val Garland and Dominic Skinner after losing out in the Face Off to Samah.

Speaking exclusively to Metro.co.uk after his exit, the star shared how he goes way back with Jack, who is one of the eight remaining contestants, after meeting at college in Cambridge.

‘I moved to this little small village and me and Jack got the same bus,’ Elliott revealed. ‘They had bright pink hair and I said, I’m going to sit next to her because she’s a moment.

‘They introduced me to make-up really.’

Elliott and Jack both signed up to appear on this year’s series of Glow Up and only found out they had each applied during the audition process.

Having been friends for over a decade, they never saw themselves as competing against each other and offered each other tips with their looks through the filming process.

‘I didn’t really look at it as a competition, I looked at it as a platform where I could showcase what I do and then if I leave at a certain point then it’s my time,’ Elliott continued.

‘We’re incredibly supportive of each other and it was nice to have another opinion.

‘When you’re friends with someone for so long, you know your friend of 10 years is going to turn around and be like, “maybe let’s not do that one”.’

Talking of friends, Elliott added that he formed a kinship with the other contestants and credits the pandemic for their familial bond.

‘With the beauty industry, a lot of us had been out of work because of the pandemic,’ he said. ‘I lost my job and I had to move out of London and I was sleeping on my mum’s floor.

‘That’s when I applied, I needed some creativity to get me out of the situation. I feel like we all had an element of a struggle with the pandemic so all of us being together and listening to everyone’s stories made us so close nit.

‘We’re in a group chat where we’re constantly checking in on each other.’

Although Elliott has lost his place in the series, we’ve not seen the last of him yet as he’s teased an exciting project on the way with Jack. Oh, and maybe, just maybe, we’ll see him on Drag Race UK one day.

BBC Three’s Glow Up is streaming now on BBC iPlayer, with new episodes every Tuesday at 7pm.