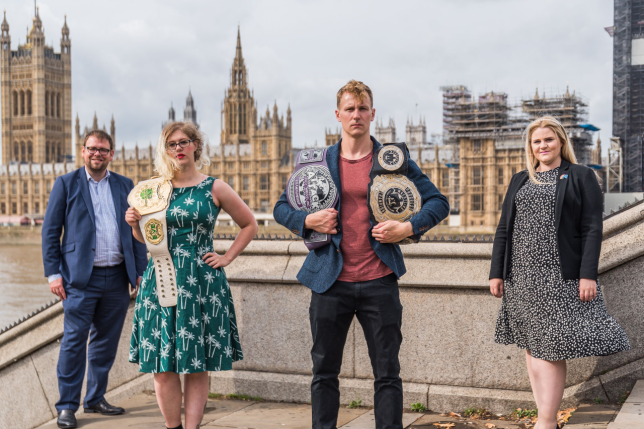 MPs have called for change in the industry (Photo: Oli Sandler Photography)

The British wrestling scene is in dire need of change after last year’s Speaking Out movement outlined how significantly conditions must improve.

Earlier this month, an All-Party Parliamentary Group – led by Conservative MP Mark Fletcher and Labour MP Alex Davies-Jones – unveiled its report into the state of the industry, and outlined measures they believe should be taken to make it a safer and more sustainable place for everyone.

On Thursday, Mr. Fletcher presented the findings in an adjournment debate in the House of Commons, with the report calling for clearer definition of professional wrestling in the UK, and the need for a governing body.

Speaking exclusively to Metro.co.uk before the debate, he said: ‘There aren’t very many industries that are pretty much entirely unregulated, that break laws on quite a number of fronts, and no one pays attention to that side of things.

‘It’s a bit of a blind spot, really. I think the report gives the industry a lot of credibility.

‘It says “This is a brilliant thing that we love and entertains lots of people”, and it treats it as a really grown-up industry in terms of, “These are issues around health and safety, these are the good things it does.” ‘

Mr. Fletcher’s call for a governing body is something he believes is particularly vital after the Speaking Out movement, which revealed allegations of sexual misconduct and assault across the industry.

‘Speaking Out is one part of a much bigger cultural problem, which is around accountability, around acknowledgement of the law, around governance, around culture,’ he explained.

Today, for the first time in some 8 decades, wrestling was discussed in parliament and received a response from the Government. That in of itself is a positive step forward. The APPG report gives a framework for action but we want input and feedback, as Mark outlined.

‘Those are the two big things – culture, and organisational structure. And wrestling fails in lots of ways on both of them.’

While he noted that ‘there are people doing amazing things’ in wrestling, he acknowledged the definite need for wider change across the industry, particularly for the victims of Speaking Out.

He added: ‘The people who were victims of Speaking Out deserve to get the changes that they need to see happen. But it’s not about one or two individuals, it is a cultural and governance issue that is required to change for us to solve the problems.’

Mr. Fletcher – a passionate wrestling fan who has recalled his love for attending live shows and hails the business as one of the UK’s ‘best cultural exports’ – also acknowledged criticism of the report regarding ‘certain individuals or certain organisations’ who were included in the report.

‘We were desperate to try and find a way that helped British wrestling through this report,’ he added. ‘That involved us speaking and giving a voice to anyone who came forward, and equally addressing all of the issues that we’ve been made aware of.

‘We’re not a court of law. If someone has been sexually assaulted or anything else, the police are the people that need to determine, ultimately, whether action needs to be taken.’

During the debate, he reiterated the key recommendations for the industry stemming from the report, including establishing a governing body, increasing the health and safety standards and safeguarding rules, and setting up a system to help those who are harassed or abused following the Speaking Out movement.

ð Really looking forward to seeing my Co-Chair of the @appgwrestling, Mark Fletcher (who isn’t on Twitter!) lead on a debate today to discuss the findings of our report.

ð Sadly I’m unable to be there in person but am sure Mark will do a stellar job!@TWMNewz pic.twitter.com/tQOOhu6NRa

He also went back to the idea that defining wrestling training as a sport and the shows themselves as an art would ensure they get covered and protected in the right way.

Another issue the industry faces is the potential impact of Brexit, with British wrestling caught in an uncertain position when it comes to both talent working outside the UK, and bringing in wrestlers from across Europe.

‘I’m not sure we know,’ Mr. Fletcher admitted. ‘The difficult thing is that a lot of wrestling promotions don’t know and aren’t engaged in this process.

‘There’s no one coming forward on behalf of the industry saying, “This is a problem because we have wrestlers that come in from X, Y and Z and either we need a new visa situation, or we need to understand what the processes is going to be”, and then disseminating that down.

Many fans have also pointed to WWE’s presence in the United Kingdom, with its NXT UK brand and London-based Performance Centre, and Mr. Fletcher admitted he would like the global promotion to engage in the work the APPG are trying to do.

Going back to one of the report’s key proposals, Mr. Fletcher described the establishment of a governing body as ‘blindingly obvious’, but the very nature of British wrestling – made up of largely independent promotions – makes it a difficult prospect.

Now, he has called on companies and talent across the UK to stand up and be counted, and to take advantage of the unique position the industry finds itself in after the report and debate.

He pondered: ‘I think the next stage is a really grown-up conversation with the promotions to find out – alright, cards on the table, this is where we think we need to go. We gave a lot of thought to it – where are you guys?’

‘I am sticking my neck out there to help something that I love,’ he said. ‘I really, really hope that the promoters and promotions see this as a way forward.

‘I struggle to work out when a time like this will arise again when you’ve got the offer of help to do it.’