Ross and Rachel, forever in our hearts (Picture: Robert Isenberg/NBCUniversal via Getty Images)

Jennifer Aniston has spoken about the dating rumours between her and her former Friends co-star David Schwimmer, denying the speculation that romance has blossomed between them.

Ever since Friends premiered all the way back in 1994, many diehard fans across the globe have hoped that Rachel and Ross’ love story could be emulated off screen between the actors who play the popular sitcom characters.

While it never appeared as though anything did happen between Jennifer and David when they were filming the show, during the recent Friends reunion, David, 54, admitted that he used to have a ‘major crush’ on Jennifer, 52, which she reciprocated.

Earlier this summer, it was claimed that Jennifer and David had finally hooked up, prompting celebrations among fans far and wide.

However, David promptly shut down the rumours, with Jennifer now following suit.

During a recent interview with Entertainment Tonight, the star of The Morning Show laughed off the rumour mill, saying that she found the speculation about their relationship ‘bizarre’. 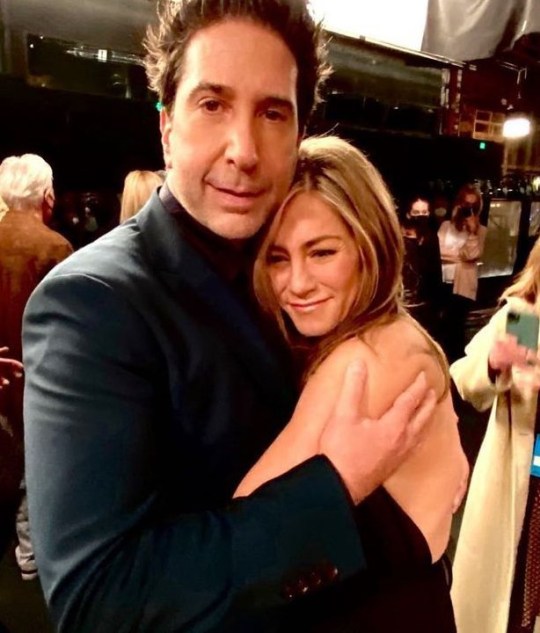 ‘That was bizarre. I could not believe that, actually. Like, really? That’s my brother,’ she said.

However, she added that she did understand why fans became so excited about the prospect of them getting together after all these years.

‘But I understand it, though,’ she said. ‘It just shows you how hopeful people are for fantasies, for dreams to come true.’

During the Friends reunion, David was sitting amongst his fellow cast when he said: ‘The first season, we – I had a major crush on Jen,’ to which she replied: ‘It was reciprocated.’

‘At some point, we were both crushing hard on each other,’ David added.

‘But it was like two ships passing, because one of us was always in a relationship. And we never crossed that boundary. We respected that.’

Jennifer recently became embroiled in a chaotic interview with This Morning’s Josie Gibson while promoting The Morning Show season two with her co-star Reese Witherspoon, when she hilariously misheard the TV presenter’s question.

When Josie asked Jennifer if she was ‘a hugger’, the actor accidentally thought that Josie said ‘hooker’.

Josie looked mortified by the mistake, while Reese laughed over the light-hearted mishap.

Friends is available to watch on Netflix.

US news: Man arrested with machete arrested near US Capitol