Courteney Cox and Matt LeBlanc had an emotional moment during the Friends Reunion (Picture: HBO/Backgrid)

Lisa Kudrow revealed a sweet moment between her co-stars Courteney Cox and Matt LeBlanc that fans might have missed as her favourite scene from the Friends reunion.

The six stars of the hit show, also including David Schwimmer, Jennifer Aniston and Matthew Perry, were brought back together for a TV special on HBO hosted by James Corden, looking back at their time on the sitcom.

Fans saw Lisa, who played Phoebe, duet with Lady Gaga on her busking song Smelly Cat, while David and Jennifer confessed they ended up secretly fancying each other while playing on-again-off-again couple Ross and Rachel.

There were lots of great scenes to choose from but the actress has her own favourite moment, and it’s not an obvious one.

Lisa told E! News: ‘Well, Courteney comes in and burst into tears and I grab a napkin or a tissue. LeBlanc takes it because he is telling us a story and doesn’t want to skip a beat and starts dabbing her eyes, just on automatic.’ 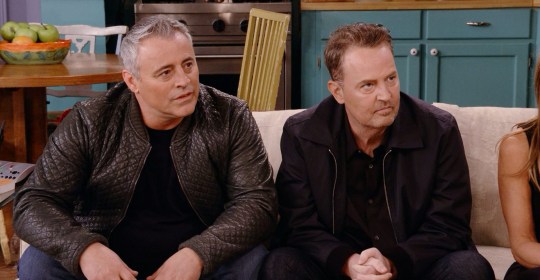 The Feel Good star previously expressed surprise at Courteney’s tears as ‘she’s so not emotional’.

Speaking to Gayle King on SiriusXM she went on: ‘It was excitement. “This is going to be so fun to walk on to the set” and they’re bringing all of the sets out from storage and putting it all back together.” We romanticised it.’

Her comments come after Jennifer thanked fans for showing the love after the special TV event.

Posting pictures of the cast behind-the-scenes on Instagram, the Morning Show star wrote: ‘Still basking in all the love from the #FriendsReunion. Thank you each and every one of you.’

Friends fans should enjoy this moment while they can, as the stars have decided it will be the last time they all get back together for TV.

Friends: The Reunion is available to stream on HBO Max in the US and NOW in the UK.