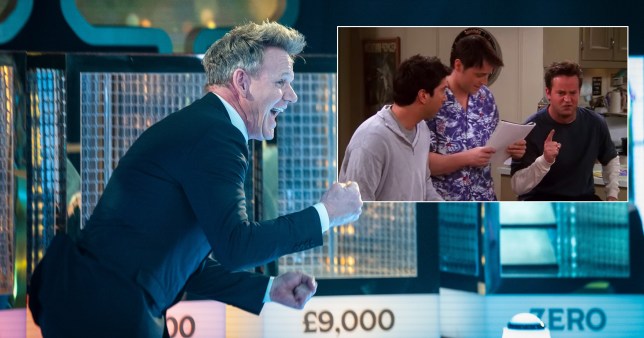 Well now we’ve seen it, it’s near impossible to unsee such a comparison.

You really can’t get much past a Friends fan – with one recently pointing out Jennifer Aniston’s vocal tic they insisted would ‘ruin’ the show for viewers – and following the premiere of chef Gordon’s game show they’ve spotted some stark similarities.

Gordon’s show first aired on the BBC last night and gives contestants – who compete in pairs – the chance to win £100,000.

They answer questions in order to stack different sized gold bars onto a precarious balance board and the more bars, the more money they’ll take home. But if the board tips over, they lose the lot.

It’s never that simple, though, is it? 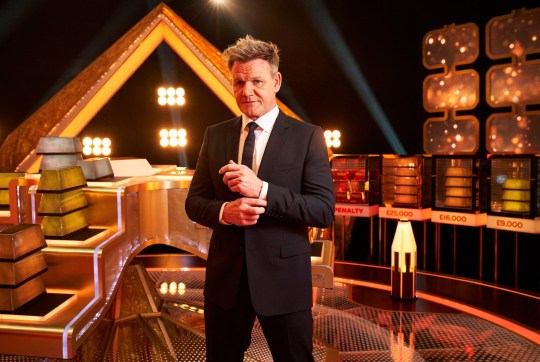 A lot of people were confused by the concept (Picture: BBC)

While the broadcaster said the ‘poise, precision, knowledge and nerve’ of hopefuls will be tested along the way, many fans think it’s all just another Bamboozled over the rather confusing outline.

When it comes to Bank Balance, Gordon’s game deals with 12 ‘zones’ and 12 ‘stacks’ of bars, as well as ‘penalty bars’ for wrong answers, plus ‘zero bars’ that rather unhelpfully add nana money to the balance. And then you’ve got ‘pick again’ credits just to really get you thinking.

Over in the other corner, Bamboozled stems from a 2002 episode of Friends where Joey uses Ross (David Schwimmer) and Chandler (Matthew Perry) as fake contestants as he practices his audition to host aforemenionted show Bamboozled.

It soon becomes clear Bamboozled is made up of utter nonsensical rules, such as the Wicked Wango card, the Wheel Of Mayhem, Ladder of Chance or a Google card. Oh and the choice to go ‘higher or lower’, but it’s not clear what you’re going higher or lower on.

We reckon that perhaps we need a few more weeks to get the gist of what Bank Balance is all about, but rather hilariously viewers were wondering whether Joey was the mastermind behind such a television endeavour as they reacted online last night.

One very lost punter wrote on Twitter: ‘Is bank balance based on the friends game bamboozled the rules took about 5 minutes to explain?’

Just turned on Bank Balance and I donât have a single clue what is going on. Some sort of weird balancing thing with gold and silver bars on.

Now thereâs a red one and a penalty thing.

Anyone remember Bamboozled in Friends? This is where I am right now!#BankBalance

Drawing a comparison between the two objectives, another added: ‘Never has a game been more complicated since Joey Tribbiani introduced Bamboozled #BankBalance.’

It wasn’t just Friends that Bank Balance conjured up memories of for some, as other viewers felt the set looked a little like Doctor Who’s Tardis.

We suppose there is a lot to unpack from this show already.