John Walker is dealing with the aftermath of his actions (Picture: Marvel Studios/Disney)

Warning: major spoilers ahead for episode five of The Falcon and The Winter Soldier.

The latest episode of Marvel’s Falcon and The Winter Soldier on Disney Plus threw fans through a loop, with huge star Julia Louis-Dreyfus making a shocking MCU cameo and John Walker (Wyatt Russell) being stripped of his Captain America title.

Following the reveal of Seinfeld star Julia as Contessa Valentina Allegra de Fontaine, one of the most significant moments of episode five came right at the very end in the series’ very first mid-credits scene.

The scene reveals what John has decided to do now that he is no longer deemed fit to represent the US government as Captain America, after committing murder in broad daylight.

If the steely look in his eye is anything to go by, he isn’t prepared to let go of his mantle that easily, no matter what Bucky Barnes (Sebastian Stan) and Sam Wilson (Anthony Mackie) have to say about it.

With the super-soldier serum searing through his veins and revenge playing on his mind following the death of his wingman Lemar Hoskins (Clé Bennett), there’s no knowing the horror that John may inflict when he goes on a rampage on his own. 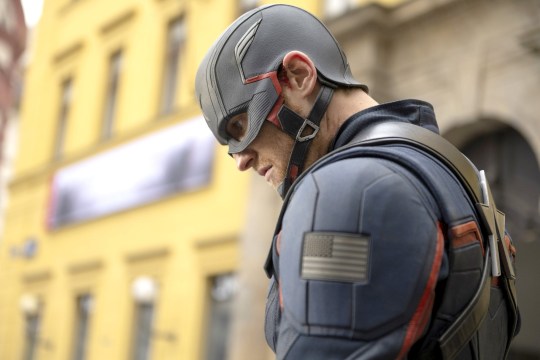 What will John do next, now that the shield is out of his grasp? (Picture: Marvel Studios/Disney)

So what does the mid-credits scene mean?

What does the Falcon and Winter Soldier mid-credits scene mean?

The mid-credits scene in Falcon and The Winter Soldier episode five draws parallels with another montage from the MCU, when Tony Stark (Robert Downey Jr) was creating his first suit of armour in his origin Iron Man film.

But John’s agenda is clearly of a menacing nature, as he is seemingly refusing to back down from being Captain America despite witnesses watch him brutally kill a member of the Flag-Smashers.

Donning a welding helmet, he sets about making a new version of Captain America’s shield, which Bucky and Sam managed to wrench away from him.

Placing what appears to be one of his medals of honour on the metal, John then spray paints the different parts of the shield red, blue and white, creating a pretty believable knock-off of the real thing.

While John may return in episode six continuing to claim that he is Captain America, there is a possibility that he will adopt a different alias.

In the Marvel comic books, the character becomes known as the patriotic U.S. Agent.

However, considering what John has done in Falcon and The Winter Soldier, is there still a possibility that he might find redemption? Or is he too far gone to be saved?

The Falcon and The Winter Soldier is available to watch on Disney Plus with the final episode being released next Friday.