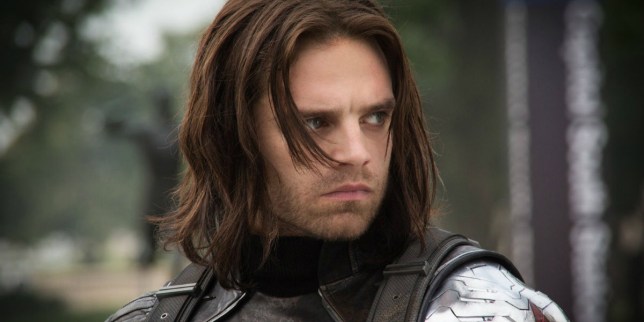 Bucky is holding onto a old possession of his friend Steve’s (Picture: Marvel/Disney)

Warning: spoilers ahead for episode three of The Falcon and The Winter Soldier.

Episode three of Marvel’s The Falcon and The Winter Soldier on Disney Plus had fans in tears as it was revealed that James ‘Bucky’ Barnes (Sebastian Stan) was holding onto a notebook previously owned by his best friend Steve Rogers, aka the OG Captain America (Chris Evans).

At the start of the new MCU series, Bucky was shown referring to a list written down in a notebook of people who were part of his efforts to make amends for his past as brainwashed assassin the Winter Soldier.

As Bucky gazed at the list of names, it reminded many of a notebook used by Steve in the 2014 film Captain America: Winter Soldier, when the formerly frozen super soldier would write down things he needed to catch up on from modern pop culture, from Star Wars to Marvin Gaye’s album Troubleman.

In the latest instalment of Falcon and The Winter Soldier, it was confirmed that the two notebooks were one and the same, meaning that at some point, Steve passed his notebook onto his old friend.

This heart-wrenching revelation had many fans bawling, with several people speculating over Steve’s reasoning for handing over his contemporary references guide.

‘Wait Bucky is using Steve’s book oh my god my heart hurts I’m gonna cry,’ one person tweeted, while another fan said: ‘Bucky’s writing his amends in Steve’s notebook… this show is going to break me.’

While some fans may have concluded that Steve simply gave Bucky the notebook as a keepsake, others thought it was so that Bucky could check out his pop culture list.

‘So Steve really gave his little notebook to Bucky so he can keep with all things in modern world,’ one person speculated.

‘Steve probably gave Buck the notebook before he went back in time and told Buck to write his own list of things he wants to do/explore and instead Buck wrote a list of the ppl he wronged as The Winter Soldier I’m sad,’ another remarked.

At the very end of The Falcon and The Winter Soldier episode three, fans were shocked beyond belief when Black Panther character Ayo (Florence Kasumba) showed up, greeting Bucky in Latvia.

Ayo told Bucky – who was looked after in Wakanda after the events of Captain America: Civil War – that she was after Baron Helmut Zemo (Daniel Brühl), who Bucky and Sam Wilson (Anthony Mackie) helped escape from prison.

Could more Black Panther characters show up as the story progresses? We’ll just have to wait to find out!