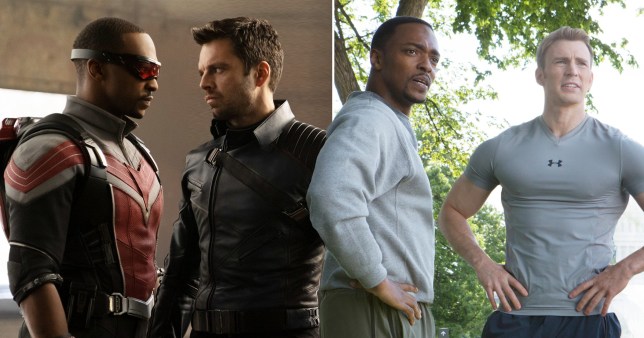 The three superheroes all have something in common (Picture: Marvel Studios/AP)

Warning: spoilers ahead for episode one of The Falcon and The Winter Soldier.

The first episode of Marvel’s The Falcon and The Winter Soldier on Disney Plus includes a sad nod to a piece of dialogue in Captain America: Winter Soldier, revealing how the moment connects to James ‘Bucky’ Barnes (Sebastian Stan) in the present day.

In episode one of the MCU show, the first time we’re reunited with Bucky is in a flashback sequence, when he is seen back in his deadly Winter Soldier days, mercilessly striking down everyone in his path while on a murderous rampage.

Present-day Bucky then wakes up from his nightmare, breathing heavily after reliving the memory that’s haunted him in his sleep.

As Bucky sits up, he’s seen lying down on a hard floor in a scantily furnished apartment, a blanket covering him as a TV set plays a football match in the background.

This harks back to an exchange between Sam Wilson (Anthony Mackie) and Steve Rogers (Chris Evans) in Captain America: Winter Soldier, when they discuss how they’ve struggled to acclimatise to sleeping in a comfortable bed after their military days.

In the 2017 film, after Sam and Steve first meet, Sam comments to Cap that it ‘must have freaked you out coming home after the whole defrosting thing’.

After Steve replies that it ‘takes some getting used to’, Sam adds: ‘It’s your bed, right? Your bed, it’s too soft.

‘When I was over there I would sleep on the ground, use rocks for pillows like cavemen. Now I’m home, lying in my bed and it’s like…’

Steve then finishes the sentence, stating: ‘Lying on a marshmallow. I feel like I’m going to sink right to the floor.’

Not Bucky sleeping in the floor because in ca:ws Steve mentions how weird it is to be back and Sam says âitâs the mattress isnât it? Like sleeping on a marshmallowâ and itâs more familiar to sleep on the floor #FalconAndTheWinterSoldier

Several Falcon and The Winter Soldier fans noticed this correlation.

‘Not Bucky sleeping [on] the floor because in [Captain America: Winter Soldier] Steve mentions how weird it is to be back and Sam says “it’s the mattress isn’t it? Like sleeping on a marshmallow” and it’s more familiar to sleep on the floor,’ one person said.

‘Idk what i’m more saddened by, bucky barnes having to sleep on the floor from trauma or the fact he’s watching a liverpool game,’ another remarked.

Later on in the first episode, Bucky tries to get back into dating after several decades out of the game.

An offhand remark that he makes about seeing a lot of ‘tiger photos’ on dating apps led some viewers to conclude that Bucky could be canonically bisexual, as tiger pictures are known as a common trope of men’s dating app profiles.

The Falcon and The Winter is available to watch on Disney Plus with new episodes released on Fridays.

The Ship Stuck in the Suez Canal Is Glorious