Tinie impressed on his presenting debut on Wednesday (Picture: Channel 4)

Rapper-turned-property guru Tinie Tempah’s new Channel 4 show was a big hit with viewers tonight, as was his style.

Tinie has been involved in property since he was just 22 and tonight, his programmed titled Extraordinary Extensions came to the broadcaster.

He soon won over fans with his charismatic presenting style, property knowledge as well as his fantastic fashion sense, of course.

But one outfit stuck out in particular to fans, when he at one point was filmed wearing a incredible denim jacket with pastries across the front of it.

Of course, those watching at home were soon left commenting on the unique item of clothing, something Paul Hollywood himself would be proud of.

One fan shared on Twitter: ‘Tinie just turned up with a shacket covered in pictures of various pastries and it’s made the whole programme worth it #ExtraordinaryExtensions.’ 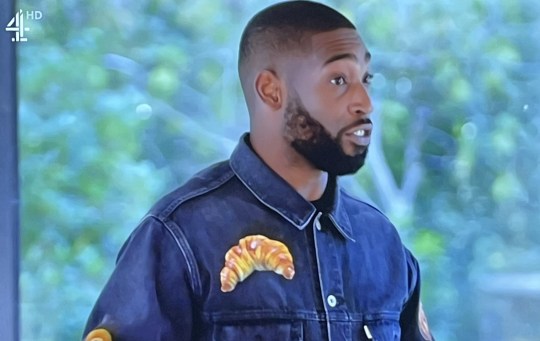 Fans were obsessed with the jacket (Picture: Channel 4/Twitter/@Samanth22356123)

Another commented: ‘Keep repeating “Tinie’s pastry shacket” to myself #ExtraordinaryExtensions.’

‘Tinie Tempah wearing a shirt with a croissant print, discussing HVAC options with a kooky couple is a lot for a Wednesday evening #ExtraordinaryExtensions,’ joked a third.

An impressed viewer remarked: ‘Just when you thought the Tinie Tempah programme about extensions couldn’t get any randomer he’s floating about with croissants on his shirt what am I watching?’

‘Stuff the houses… I’m living for Tinie’s quirky fashion!! Paul Hollywood would wet himself for that croissant jacket!! #ExtraordinaryExtensions,’ a Twitter user said.

But don’t worry, it will only set you back a cool £468 if you fancy getting one yourself.

The jacket, from Farfetch, can also be purchased alongside matching pastry-style trousers if you fancy really impressing your pals.

Extraordinary Extensions continues next Wednesday at 9PM on Channel 4.