DWTS: Kourtney Kardashian and Travis in audience for Charli D’Amelio 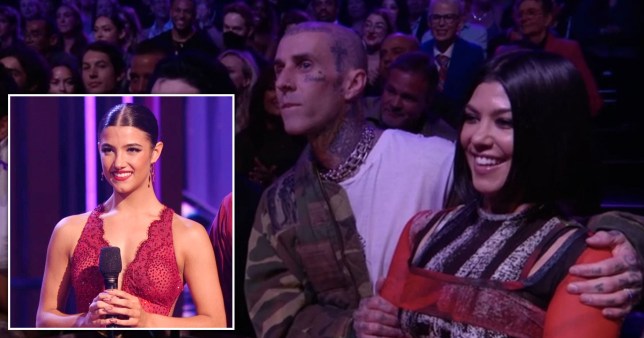 Kourtney Kardashian and Travis Barker had front row seats in the Dancing With The Star audience as they showed their support for Charli D’Amelio.

The TikTok star is in a relationship with the Blink 182 drummer’s son Landon Barker, 18, who also cheered on from the sidelines.

On the hit Disney Plus programme, a spin-off of the UK’s Strictly Come Dancing, Charli is paired with pro dancer Mark Ballas.

Over the past three weeks, Charli and Mark have not scored less than an eight, with their latest performance to No Time To Die for James Bond week winning them 33 points out of a maximum of 40.

After watching their Rumba, Len said: ‘Three weeks we’ve been watching you dance and three weeks you dance fantastic. Lovely feet. Lovely legs. It had a beautiful finish.’

Other celebrities trying to win the Glitterball Trophy include Selma Blair, who was diagnosed with multiple sclerosis in 2018. 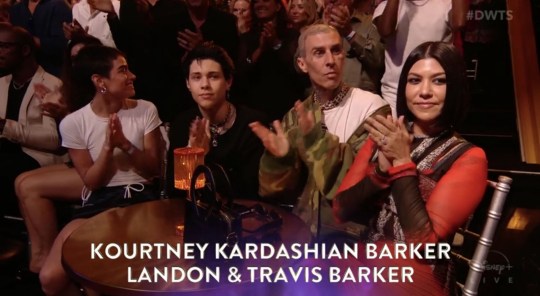 During their latest routine, partner Sasha placed a blindfold on the Cruel Intentions actress, 50, which baffled some viewers of the show.

Selma later explained the blindfold helped her to cope with the sensory overload she experienced while filming. 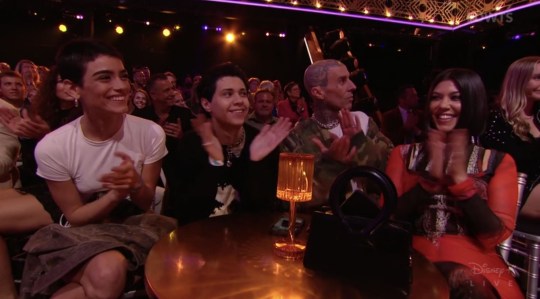 The gang were in high spirits (Picture: Disney+ / BACKGRID)

Meanwhile, Kourtney recently revealed on an episode of The Kardashian that she and Travis will be trying to conceive naturally after eight months of IVF.

The 43-year-old said: ‘After eight months of our IVF journey, we took a break and wanted to try things naturally.

‘The doctors had told us that we still have some really good-looking follicles and that it was the best they’ve seen.’

The Poosh founder already has three children – Mason, 12, Penelope, 10, and Reign, seven – with ex-boyfriend Scott Disick, while Travis has Landon and daughter Alabama, 16, with ex-wife Shanna Moakler, who he split from in 2008.