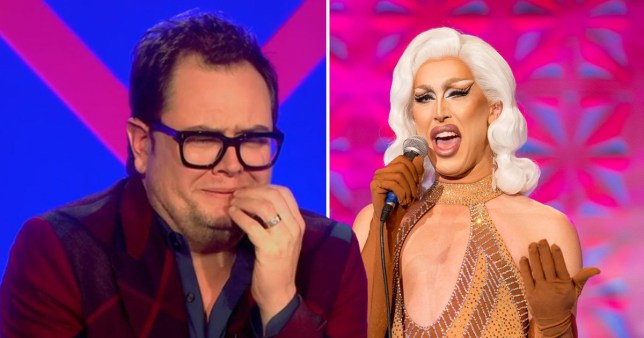 RuPaul’s Drag Race UK judge Alan Carr has revealed his phone ‘went into meltdown’ when A’Whora made an X-rated joke during her outrageous comedy stand-up set on the programme.

On Thursday evening, A’Whora became the latest queen to be eliminated from Drag Race UK after going up against her close friend Tayce in the lip sync for her life.

A’Whora was up first, having been placed first in the running order by Ellie Diamond, a decision that she made perfectly clear she was not at all pleased with.

Feeling the nerves about showing off her funny bone, A’Whora made sure her performance was memorable, reciting crude jokes about her grandmother that ended up being censored in the final cut.

In a post shared by Alan on Instagram, the comedian said that his phone was blowing up with messages from people who watched the show and were intrigued by what A’Whora said behind the bleeps.

Sharing a picture from behind-the-scenes with Dawn French, showing the pair of them at a safe distance from each other in a hallway, Alan wrote: ‘How brilliant was Dawn French on @dragraceukbbc – legend!

‘My phone went into meltdown during the stand up section asking me what was @awhora’s joke that got bleeped haha! Filth!!!’

Following her exit from the competition, A’Whora – was the proud holder of two coveted RuPeter badges – said that she was so proud of her far she came.

‘I’m so beyond proud of my entire body of work from the show. I came into the show as one person and left as another,’ she said.

‘For me you can’t compare a crown to the achievement of the person I have become, and how much more confident and stronger I feel as not a drag queen but a drag leader!

‘I mean let’s be real here, the most successful ones never win the X Factor, right?

‘So maybe I’m the winner or maybe it’s delusion… but who cares!’