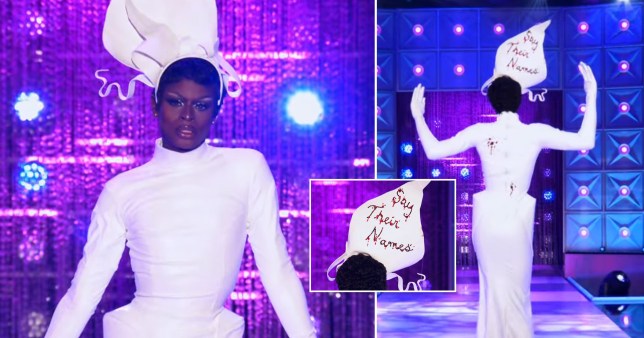 RuPaul’s Drag Race superstar Symone stunned the judges and viewers with her runway on the latest episode of the show, wearing an ensemble embellished with the phrase ‘Say Their Names’ in honour of Black Lives Matter and Black Trans Lives Matter.

In week nine of the 13th series of Drag Race in the US, RuPaul challenged the queens to bring their best ‘Fascinating Fascinators’ fashion to the runway after competing in the Snatch Game.

Symone, who impersonated abolitionist Harriet Tubman in the Snatch Game, made a grand entrance on the stage wearing a white floor-length structured gown, completing her look with a matching headdress.

While the judges were clearly impressed with her sartorial prowess, they were left in awe when she turned around to reveal the words ‘Say Their Names’ written on the back of the headdress, in addition to two embellished bullet holes on the back of the dress.

Symone explained in a VT that she ‘wanted to take this opportunity to do some activism in my drag and personify that Black angelic being’.

‘As I turn around, you see on the back there are two bullet holes. And I put my hands up. Don’t shoot,’ Symone said. 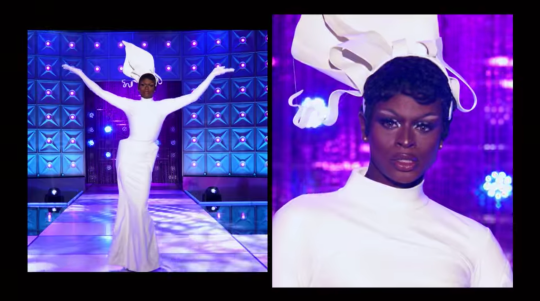 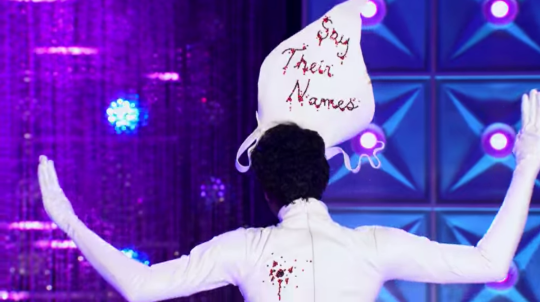 She then turns around to reveal the words and embellished bullet holes (Picture: Netflix)

‘It’s not a moment, it is a movement. We need to continue to say their names.

Later on when all of the queens were lined up on the stage and Symone was announced as safe, RuPaul personally thanked her ‘for bringing such a powerful message to the runway’.

Drag Race fans showered Symone with praise for her powerful statement, with one person tweeting: ‘Really Symone using her platform is one of the best things in the world. Can’t be more in love. BLM.’

In a post shared on social media, Symone said wearing this outfit on the runway was ‘one of the proudest moments of my life’, adding: ‘Always remember, NEVER forget!’

The drag queen also shared a video about the meaning of her look, writing in the caption: ‘For every name known and unknown, this is for you.’

‘For so long I was afraid. I was afraid to speak, to act, to live my truth,’ she says in the video.

‘But I’m no longer afraid. I’m proud. Proud to be Black and proud of my ability to stand with those whose lives have been taken from them simply because they were born darker than white. This is for you.’

Civil rights organisation Human Rights Campaign shared a tweet praising Symone’s statement-making turn on the runway, writing: ‘She made the @RuPaulsDragRace runway her stage while affirming #BlackLivesMatter and #BlackTransLivesMatter. Thank you for your art and advocacy, @the_symonee.’

‘My honor, my privilege,’ Symone responded.