It was a laugh a minute on set, apparently (Picture: BBC Studios/James Pardon)

Following the finale of Doctor Who: Flux, the Timelord and her friends will kickstart 2022 with a time loop action adventure special, set on New Year’s Eve.

Eve of the Daleks will feature the 13th doctor, played by Jodie Whittaker, Yasmin Khan played by Mandip Gill alongside Dan Lewis, who is portrayed by comedian John Bishop, being pursued by their biggest enemy, the Daleks.

Guest stars comedian Bea and actor Salmon join the festive episode, which will air on BBC One on New Year’s Day.

Leading actress Whittaker, the first female Doctor, said: ‘I had met Aisling before – and had never met Adjani – so I knew how lovely Aisling was going to be and how hilarious she is.

‘My first introduction to Adjani was when we did the read through on Zoom and he was absolutely hilarious and I couldn’t wait for his energy and Aisling’s energy, they’re so different and they complement each other so well.’ 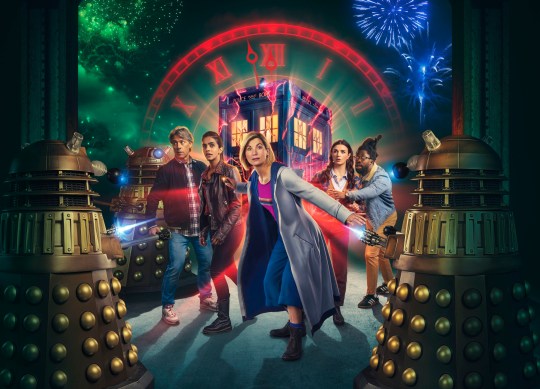 The Dr Who New Year special is going to be epic (Picture: PA)

She continued: ‘Because they’re both from a world of comedy which I’m not from or Mandip’s not from (but obviously John is), it was like comedy gold dust just being on set with them, they were making us laugh the whole time.’

The 39-year-old announced in July she will be leaving the BBC sci-fi drama following the upcoming series and a trio of specials next year.

Bishop, 55, also said ‘the relationship between Aisling and Adjani is great’ as the pair dropped in their own ad libs which were ‘very funny.’

The Liverpudlian said ‘Aisling can flip her voices and characters, so there were loads of messing about and having a laugh’ on set. 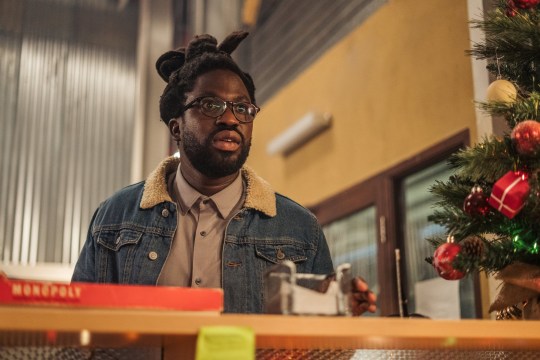 Adjani Salmon was one of the new guest stars (Picture: BBC Studios/James Pardon)

Gill, 33, has said they all had ‘such fun’ working together for the one-off episode, as Aisling created characters from her life and played them for her like ‘a one woman show every time the cameras cut.’

‘There was a time where Jodie, Aisling and I really convinced ourselves that it would be a good idea to do a music video because there was a big silver gate and it reminded us of Girls Aloud’s Sound Of The Underground.

This will be the first of three Doctor Who specials airing in 2022.

The second special airs in spring and Whittaker’s final feature-length special will air in the autumn, as part of the BBC’s Centenary celebration.

Dreaming Whilst Black star Salmon added that ‘the entire Doctor Who clique is like a family and a unit,’ saying they still had such ‘synergy’ despite the ‘high pressure environment’ they were working in.

‘As a filmmaker, I’m watching it thinking, “I want this energy when I’m on set.”‘

Doctor Who Eve Of The Daleks will air on BBC One and BBC iPlayer at 7pm on New Year’s Day 2022.